Cathedral Catholic will take a 12-1 record and 12-game winning streak into the state championship game against the Northern California regional champion.

Folsom (12-1) will play at Central Fresno (13-0) on Friday, Dec. 7, to determine the Northern California representative.

San Diego defeated Linfield Christian from Temecula, 42-31, in come-from-behind fashion last Saturday. The Cavers (11-2) will play at Colfax (13-0) on Dec. 15 for the state title.

Orange Glen defeated Los Angeles Locke, 22-14, last Saturday. The Patriots, enjoying a history-making season with a 10-3 record, will play at San Francisco Lincoln (12-0) on Dec. 15 for the state title.

St. Augustine and Morse both ended their seasons with losses in the regional playoffs.

The Saints, who were tied 7-7 at halftime, were limited to 79 rushing yards in the loss.

Peraza ended the season with 2,559 passing yards and 27 touchdowns against 11 interceptions. He also rushed for 258 yards and scored two touchdowns in 14 games.

Shawn Poma scored on touchdown runs of 33 and 80 yards while place-kicker Dean Janikowski drilled a 40-yard field goal to stake Cathedral Catholic to a lead in its game against Narbonne. But the game-decided play took place on defense as Jalen Dye intercepted a pass in the end zone to deny the Gauchos the game-winning touchdown in the waning seconds of the game.

Poma, named the San Diego Section Offensive Player of the Year, rushed for 246 yards to lead the Dons to the state bowl championship.

The Gauchos tacked on 210 rushing yards to finish with 538 total offensive yards in the loss.

McClendon was nearly unstoppable throughout the season at the running back position, using his size (6-2, 210) to trample opposing defenders. For instance, he rushed for 378 yards and scored five touchdowns in a 35-0 win over West Hills to enable the Monarchs to capture this year’s Grossmont Valley League championship.

Included in the yardage count was a 99-yard touchdown run.

Monte Vista finished 9-2 this season following a 27-17 loss to visiting Santa Fe Christian on Nov. 9 in the Division III quarterfinals.

McClendon, who has committed to UCLA, became the first Monarch to hoist the trophy.

“It feels amazing, it’s the best feeling of my life right now,” McClendon told a live television audience. “It’s the best thing that’s ever happened to me. I want to shout out to my whole team, my defense, all the coaches, my o-line I wouldn’t be able to do it without you guys. Thank you guys for pushing me all the way.”

McCurty, who resides with his family on a ranch in Jamul, has made more than 399 tackles in each of the past two seasons. The 6-1, 230-pound inside linebacker logged a team-leading 193 tackles this season while making eight tackles for a loss, nine sacks and three fumble recoveries.

He scored one touchdown on a fumble recovery and also caught a touchdown pass as a receiver.

He has received an offer from Idaho to compete at the next level as well as interest from Arizona State, Colorado, Dixie State and Fresno State.

Beachem accounted for 3,084 yards in total offense this past season for the CIF quarterfinalist Pirates, including 2,218 yards passing with 18 touchdowns and 941 rushing yards with 10 scores.

Sanborn, who will play next season at Stanford University, has been invited to play in the upcoming high school All-American Bowl. The game, which has produced 380 NFL Draft picks, will be played Jan. 5 in San Antonio.

Sam Darnold (2015) of the Now York Jets, Jalen Ramsey (2013) of the Jacksonville Jaguars, Odell Beckham Jr. (2011) of the New York Giants Andrew Luck (2008) of the Indianapolis Colts and Tim Tebow (2006) of the Denver Broncos have all played in the high school All-American Bowl game.

Wile is currently the punter for the NFL Minnesota Vikings.

Schmid just completed his fourth season as a punter at Harvard University.

Sanborn led the Lancers in scoring with 148 points on 14 touchdowns and 64 kicking points. He was 58-for-59 on extra-point conversions and perfect on two field goal attempts, including a 47-yard field goal.

On defense, he ranked third on the team with 82 tackles. As a defender, he recorded three interceptions, two fumble recoveries and one sack.

Noa, who played youth football for the Eastlake Panthers as an eighth-grader, collected 2,364 all-purpose yards for the Division I runner-up Highlanders this season. He rushed for 2,326 yards and 25 touchdowns. He also logged one interception while playing defense.

During the special broadcast, television viewers were serenaded by a special performance by Olympian High School band on the deck of the World War II-era aircraft carrier. 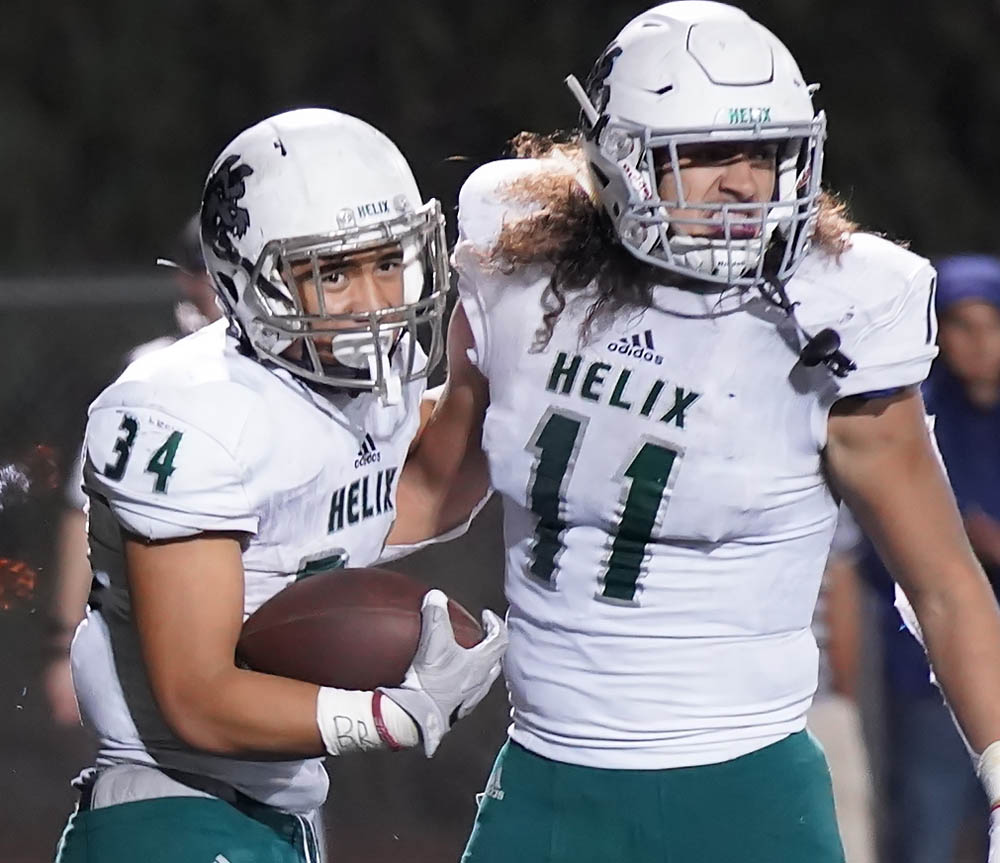