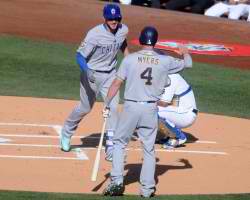 Major League Baseball’s Midseason Classic, the MLB All-Star Game, returned to San Diego for the third time overall but the first time since 1992. The long wait proved rewarding to the 42,386 fans who attended Tuesday’s game at Petco Park.

The American League pulled out a 4-2 win over the National League, though there was plenty in the game to celebrate even if your team didn’t win.

There was plenty of Padres-themed hoopla, including appearances by Padre players Wil Myers and Drew Pomeranz on the National League roster, a tribute to the late Tony Gwynn, Mr. Padre, and pre-game honors doled out to Padres’ legends Randy Jones and Trevor Hoffman.

Jones, who won the 1976 Cy Young Award with the Padres, drew the honor of throwing out the first pitch, while Hoffman, the top closer in Padres’ history, brought the game ball to the mound to the tune of “Hell’s Bells,” his theme song during his playing days.

Both Padre old-timers were visibly touched by gestures accorded to them by MLB, especially Hoffman, who placed his hand over his heart while acknowledging applause from fans.

National Sportscasters and Sportswriters Association Hall of Fame broadcaster Dick Enberg, a broadcaster with the Padres since 2010, presided over the pregame ceremony that included the renaming of the American League and National League regular season batting championship awards.

The American League batting title will now be know as the Rod Carew American League Batting Champion in honor of the seven-time AL batting champion and 18-time all-star. Carew, 70, who recently survived a heart attack, was present at Tuesday’s game.

Carew and Gwynn’s uniform numbers both have been retired by their respective teams.

A four-time all-star, Hamels recently recorded his 2,000th career strikeout, the 77th player and seventh active player to reach the milestone. He won a World Series championship with the Philadelphia Phillies in 2008.

Bryant, one of seven Cubs named to this year’s MLB All-Star Game, gave the National League an early 1-0 lead when he homered to left center field off American League starter Chris Sale of the Chicago White Sox in the first inning.

Named the top amateur baseball player in 2013, Bryant, a third baseman, was visibly aglow during an in-game press conference.

“Hitting a home run was a special moment for me,” acknowledged Bryant, who was the No. 2 pick by the Cubs in the 2013 MLB Draft. “I met my goal. In an all-star game, everyone wants to do good.”

Bryant hit .365 his freshman season at USD and was named to the United States collegiate national team as a sophomore. As a junior, he hit 31 home runs to lead the nation.

He made his Major League debut with the Cubs in April 2015 and helped lead Chicago to the National League Championship Series against the New York Mets. After hitting 26 home runs and collecting 99 RBI in his first MLB season, Bryant reaped honors as Baseball America’s Rookie of the Year and The Sporting News’s Rookie of the Year for the National League.

He was one of four Cubs infielders to start Tuesday’s game. He said it was almost like playing in a “normal” game with teammates Anthony Rizzo (first base), Ben Zobrist (second base) and Addison Russell (shortstop) all playing together in the same infield configuration.

“Throwing the ball to Anthony and seeing Addison and Ben out there, it was cool — it was a special moment for our team,” Bryant explained.

Bryant and Rizzo each recorded one hit among the four Cubs infielders. On his home run, Bryant hit a first pitch fastball into the stands that measured about 400 feet.

“A lot of us were going early in the count because a lot of the pitchers wanted to light up the radar,” Bryant explained. “I like playing here, it’s one of my favorite places. Maybe it’s something about the sun in San Diego. I seem to see the ball good here.”

“Hearing Myers, Pomeranz and Strasburg’s names called and the fans cheering — for (the San Diego fans) to remember me was nice,” Bryant said.

Myers, a first-time all-star selection, had three plate appearances in Tuesday’s game. He struck out his first at-bat but on his final at-bat, he hit a double.

“I wanted to get a base hit in the All-Star Game and, when I did, I thought to myself ‘Why not go for an extra base?’” he said.

He slid safely headfirst into the bag.

“I was really nervous my first at-bat, but I was able to calm down for my next two,” he admitted.

Myers, who entered Tuesday’s game with a .286 hitting average, 19 home runs and 60 RBI, served double duty both as a player in the ASG and as an ambassador for FanFest and other associated activities during All-Star Week.

“It was really exciting to have the All-Star Game in San Diego, to experience it and enjoy it, and it’s something I’m never going to forget,” the 25-year-old North Carolina native explained.

Pomeranz, a 27-year-old native of Tennessee, is in his first year with the Padres after previous stints with the Colorado Rockies and Oakland A’s. He entered Tuesday’s game with an 8-7 record, 2.47 earned-run average and 115 strikeouts in 102 innings.

He was named as a late addition to the NL pitching roster due to injuries to other players. He pitched a scoreless fourth inning, yielding one hit.

“It’s pretty amazing,” explained Pomeranz, who was informed just three days before Tuesday’s game that he would be playing in it. “I couldn’t sleep not knowing whether it was ‘yes’ or ‘no.’ I got it done and that’s what really matters.”

The Padres (38-51) return to regular season action on Friday with a weekend series against the NL West Division-leading San Francisco Giants (57-33).

“We’ve got to get it going again,” Myers said succinctly.

“I want to duplicate what I did in the first half,” Pomeranz added.

American League 4,
National League 2
Eric Hosmer of the reigning world champion Kansas City Royals earned MVP honors for Tuesday’s game after cracking a solo home run in the bottom of the second inning. Hosmer went two-for-three with two RBI and two walks in the game. His sharp single, deflected by Bryant, scored Toronto’s Edwin Encarnacion in the bottom of the third inning to increase the AL All-Stars’ lead to 4-1.

Salvador Perez of the Royals hit what turned out to be a game-winning two-run home run in the bottom of the second inning. Kansas City players accounted for all four runs in the AL’s victory — the team’s fourth consecutive in all-star play.

Giants catcher Buster Posey scored the NL All-Stars’ second run in the top of the fourth inning on a single by Miami’s Marcell Ozuna.

The NL squad wasted a golden opportunity to tie the game, or even possibly take the lead, after loading the bases with two down in the top of the eighth inning. But Houston Astros’ pitcher Will Harris struck out St. Louis Cardinals’ Aledmys Diaz to end the inning.

Corey Kluber of the Cleveland Indians, one of 10 AL pitchers in the game, earned the win while Johnny Cueto of the San Francisco Giants, one of nine NL pitchers, took the loss. Baltimore’s Zach Britton received credit for the save after putting down the NL in the top of the ninth inning.

The National League out-hit the American League 10-8 in absorbing the loss.

Washington Nationals pitcher Stephen Strasburg, an alumnus of West Hills High School in Santee and San Diego State University, was initially named to the NL All-Star team and was present for Tuesday’s game but did not play due to coming off a recent injury. The No. 1 pick in the 2009 MLB Draft, Strasburg is 12-0 to start the season with a 2.62 ERA and 132 strikeouts in 106-plus innings.

Washington leads the NL East with a 54-36 record — six games ahead of the New York Mets.