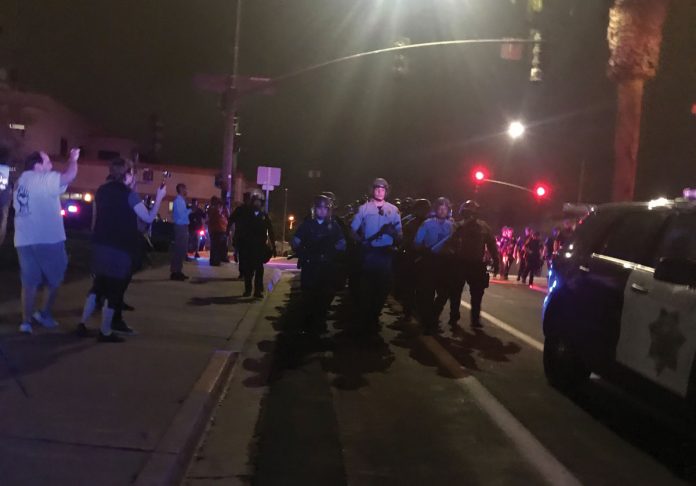 But at the July 24 meeting, activists and members of the public encountered a heavier police presence as officers from different agencies lined up outside City Hall, along 12th Street, wearing protective gear.

National City Police Chief Manuel Rodriguez said only he or the assistant chief, not city officials, have the authority to call for added reinforcements.

“Essentially what we find is by having more officers present, people are less likely to start attacking officers and turn this into a riot situation,” he said. “So essentially that’s why we had a stronger police presence.”

Blair Overstreet, a volunteer with Showing Up for Racial Justice, said while meetings have been interrupted, there was no need for police in riot gear to be called out.

“When you show up with riot gear, what you tell the community is that we are people who have the potential to riot,” she said. “And the reality is there was never intention of that.”
Overstreet said there were several moments were police officers were the ones who escalated the situation, not demonstrators.

In one instance, she said, a police officer was about to “jab a woman in the stomach with a baton” but community members had intervened and deescalated the situation.
The plan, Overstreet said, is for protestors to remain nonviolent, but disruptive in their approach if their demands are not met.

Those demands include: Putting an item about McNeil’s death on a future council agenda, the release of all audio and body camera footage relating to the situation and an outside-third party investigation and the release of the medical examiner’s report. They even demanded that the police chief either resign or get fired.

Initially, the Sherriff’s Department sent out a squad of 12 deputies on the night of July 24, but sent additional deputies later that night as other agencies were also responding, George said.

National City Mayor Ron Morrison said he was told by the police chief the day before the July 24 meeting that there was a request sent out for other agencies as a “safe guard.”
Chula Vista Police Capt. Phil Collum said his agency received an “urgent call for mutual aid” at about 7:25 p.m., nearly an hour and a half after the start of the 6 p.m. meeting.
Collum said 11 Chula Vista police agents were pulled off their assignments and were dispatched to National City, along with a supervising officer. He said at about 10:28 p.m. the last Chula Vista cop left the scene.

Rodriguez said he had asked for mutual aid “ahead of time” because what he calls “professional protestors” have escalated their conflict.

“They’re escalating their tactics and therefore we needed to bring in more resources in order to ensure that we keep things safe,” Rodriguez said. “Some of these protestors are spitting in our officers’ faces. They’re angry, (displaying) angry, assaultive behavior calling (officers) murderers and all these things.”

Lane takes issue with the police chief saying officers have been spit on.

“We have organized and we have committed ourselves to nonviolence and we have proven it every time,” Lane said. “If any protestor spit on any of his police officers during any of our protests, (then) provide the (body camera) video.”

Morrison said he stands by the police department’s request for additional support because he said although protestors say they are nonviolent, he said a two-minute clip posted on social media of a previous protest, demonstrators can be heard yelling: “We are going to burn this city down!” and “Police officers need to turn in their badge or die trying!”
Rodriguez added that during previous demonstrations people were trying to block exits, preventing officers from taking arrestees to jail.

That night, officers from different agencies created a barrier between arrestees and protestors so that arrestees can be transported in police cars and taken to jail.
Overstreet, who was one of six people arrested that night, disputes Rodriguez’s claim and said people have not prevented police officers from doing their jobs.