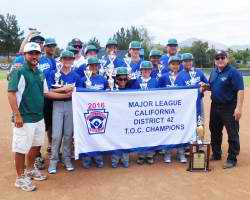 Park View finished 3-0 in the nine-team tournament. Park View defeated South Bay, 14-0, in its tournament opener on June 15, then topped Chula Vista National by a score of 7-1 in the semifinals on June 17.

Eastlake finished 3-1 in tournament play. Eastlake opened tournament play with a 7-6 victory against Sweetwater Valley on June 14. Eastlake then shut out Southwest, 10-0, in quarterfinal-round play on June 15. Eastlake defeated Chula Vista American, 2-0, in the semifinals on June 17.

This year’s TOC returned to its original roots, with championship teams in the Major League Division from all nine teams in the district competing rather than all-star teams. District 42 administrator Ernie Lucero said this format “levels the playing field” in the division.

The District 42 administrator commended the efforts of both TOC Majors finalists.

“The Park View team is well-deserving of first place in the Majors TOC,” Lucero said. “It should be noted that the Eastlake team never gave up and played hard until the final out.

“Park View manager Carlos Sosa and Eastlake manager Eddy Espinoza consistently demonstrated positive coaching, inspiring their team members to play to the best of their ability. I commend them for being positive role models and upholding the values of Little League.”

More TOC
District 42’s Minor League, 8U and 6U TOC tournaments are now all under way.

Semifinal games in the Minor League Division TOC bracket are scheduled Saturday, June 25, at Sweetwater Valley Little League at  11 a.m. and 2 p.m. The championship game is scheduled Sunday, June 26, at 11 a.m. at the same site.

All-Stars
The District 42 All-Star championship tournaments are scheduled to start Wednesday, June 29, in both the 12U and Junior divisions and July 5 in the 11U Division. The schedule for the 10U Division is to be announced soon.

The Junior Division tournament, which is being hosted by Eastlake Little League, is a best-of-three series between Eastlake and Luckie Waller. The second game follows on Thursday, June 30. If a third game is necessary, it would be played on Friday, July 1.

The 12U tournament championship games are scheduled July 10-11 at Sweetwater Valley Little League. This is the division that dead-ends at the Little League World Series.