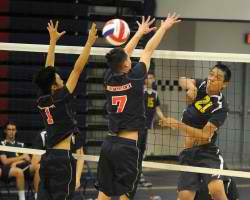 Build it and they will come. Well, they did and they’re coming! The “they” in both instances refer to two different groups. The former is Montgomery High School and the latter is the San Diego Section.

The former continues to bask in its state-of-the-art double-decker gymnasium, now just over a year old. The latter couldn’t ignore that any more and will hold its boys volleyball championship games there on May 20-21. All five division finals will take place in Aztec Territory.

This is a big deal for Montgomery High School, the Sweetwater Union High School District, the Metro Conference and the San Diego Section.

For those interested in taking in games in this fabulous facility:

The Division IV final is scheduled May 20 at 5 p.m.

The Division III final is scheduled May 20 at 7 p.m.

The Division II final is scheduled May 21 at 1 p.m.

The Division I final is scheduled May 21 at 3 p.m.

The Open Division final is scheduled May 21 at 5 p.m.

Alas, Montgomery will not be able to showcase its program in the CIF finals after dropping a five-set Division II opening-round playoff match to eighth-seeded Bonita Vista on Wednesday. The ninth-seeded Aztecs did their best by roaring to a 2-0 lead by virtue of 25-21 and 25-18 wins but the Barons rallied with three consecutive wins – each one in the face of elimination – to prevail in the best-of-five format.

The Barons (15-10) advance to play at top-seeded Granite Hills (23-6) in Saturday’s division quarterfinals.

The Aztecs finished the season with a final 19-9 record after winning their fifth consecutive league title.

The visitors took the outcome of the evening in stride, as they are quite used to marathon matches this season.

“We start out slow but finish strong,” BVHS coach Anthony Harrington explained. “Playing five sets is nothing new to us.”

After staving off elimination with a decisive win in Game 3, the Barons promptly reeled off the first five points in Game 4. However, it would take a late comeback on the part of Bonita Vista to stave off elimination a second time.

The Aztecs went ahead 15-14 and went up again by a 16-15 score before the Barons regained the lead at 17-16. The visitors would build a three-point lead at 21-18 before seeing that lead shrink to zero after Montgomery tied the game 24-24.

The crowd was roaring with excitement at this point.

A service error on the part of the Aztecs gave Bonita Vista a 25-24 lead, but the hosts promptly tied the game again 25-25.

The Barons, however, won the final two points to claim a harrowing 27-25 victory.

The first team to 15 points in the tie-breaker would claim the playoff win.

Segina served the first point to give Bonita Vista a quick 1-0 lead. The Barons would move out to an early 3-1 advantage and that strong start would prove to be their saving grace.

Montgomery tied the mini-game three times – 3-3, 4-4 and 8-8 – before Bonita Vista finally managed to build a two-point edge at 10-8. But the Aztecs were right in the thick of it as well, and got their fans yelling again when they narrowed the BV lead to 11-10.

But a service error once again gave the edge to the Barons via a 12-10 lead, and the visitors finally decided not to waste the gift as they won the next two points to go up 14-10.

The hosts valiantly fought back to make the score 14-12 but it was the BV fans who had the last cheer as the Barons captured the tiebreaker to complete their dramatic comeback.

Segina credited his team with “not giving up” in the face of defeat.

“We started out in a different rotation but we changed that,” Segina noted. “We switched it up and finished strong with momentum from the (new) rotation.”

“The lineup we started with was the one we used during the regular season,” Harrington explained. “We just had to switch a couple guys and it worked out.”

“I’m proud of them for coming out ready to play,” she said. “We did play them once earlier in the season (a five-game setback to the visiting Barons on March 15), so we didn’t exactly go into this game blind.”

They will be there watching the finals, even though they will not be participating in them.

“I’m simply proud of how far we’ve come,” Isaia explained. “It’s a special opportunity for our players to see great volleyball and great teams and get a sense of what CIF championship games are like.”

In other first-round playoff games: