The California Interscholastic Federation state track and field meet is back after going dark for the past two seasons because of the COVID-19 pandemic. South County athletes have responded to the call for participants in a big way and will be well represented at this weekend’s event (May 27-28) at Buchanan High School in Clovis.

South County athletes have qualified to compete in six events in the two-day meet. Preliminary qualifying is Friday, followed by finals on Saturday.

Otay Ranch will be represented in the boys 400-meter dash by senior Haydn Brotschi.
Cardoza is the first Eastlake athlete to qualify to compete at the state meet in three events.
Amazingly, he did so while making the best of the situation last weekend with a strained quadriceps muscle.

His prayers were obviously answered — as were those of his teammates.
The Titans are sending an impressive contingent of four athletes to this weekend’s state meet. 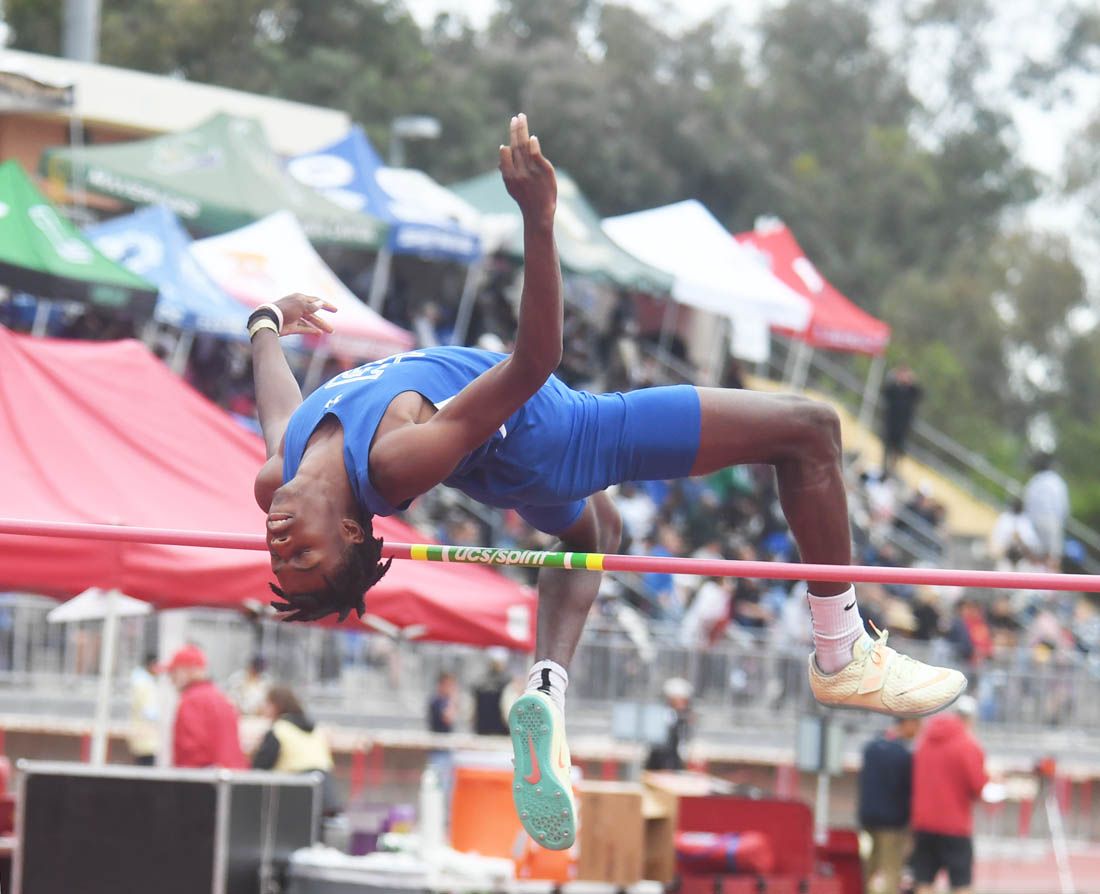 Events were run in multiple heats with athletes sorted by division for medals. Regardless of their place-finishes, athletes scored points for their respective teams.

Awards were presented by gender (male and female) and division (Division I, Division II and Division III). The top six place-finishers in each event received medals.

The stratospheric place-finish is not a first for a Titan team. Eastlake won Division II boys and girls championships in 2000.

Eastlake’s girls team finished ninth out of 31 Division I teams at this year’s section finals.

All but Cruz qualified for the state meet.

Full-blown qualifying for the state meet marks a return to normalcy for the sport, according to Steele Canyon coach Charles Tyler.

“We had a full season and we had a lot of invitationals,” said Tyler, whose team swept both gender dual meet and Grossmont Conference finals team championships. “Those Saturday meets were generally more competitive than the Thursday dual meets. We had an awesome chance to compete at a high level to help prepare us for CIF.”

State of mind
Cardoza earned three medals at the preceding Mesa League finals (gold in the high jump and long jump and silver in the triple jump) en route to earning the league’s field athlete of the year.

At last Saturday’s CIF finals, he out-dueled section leader Leon Gillis of Steele Canyon, who had posted a state-leading 6-9 mark earlier this season. Gillis settled for second place in Division I medal parade with a clearance of 6-6 that was good enough to also qualify him for the state meet.

Cardoza placed second among Division I triple jumpers (to teammate Buu) with a mark of 44-7 while Matovu (44-5.25) was thrid in the division.

Both Cardoza and Matovu competed against Mission Bay sophomore Brandon Cheeks II in the long jump and triple jump.

Cardoza enters Friday’s state prelims tied with Cheeks for the top qualifying mark in the state in the high jump.

The 6-8 ties a career best mark for Cardoza.

“This is my second time winning it (the high jump) in CIF competition,” Cardoza said. “I won it last year at Division I (separate divisional meets were held because of COVID-19 protocols) and I won it at the Open meet (which stood in as the unofficial section finals). I hurt myself in the long jump (on Saturday) but I still had a PR.”

Moore-Bastide, who won the Mesa League title by clearing 5-3, tied a personal record to win this year’s girls high jump and qualify for the state meet.

“It’s going to be my first time there, it’s exciting,” she said. “I’m looking forward to it. My goal is to clear 5-9 either at state or in college (San Francisco State). 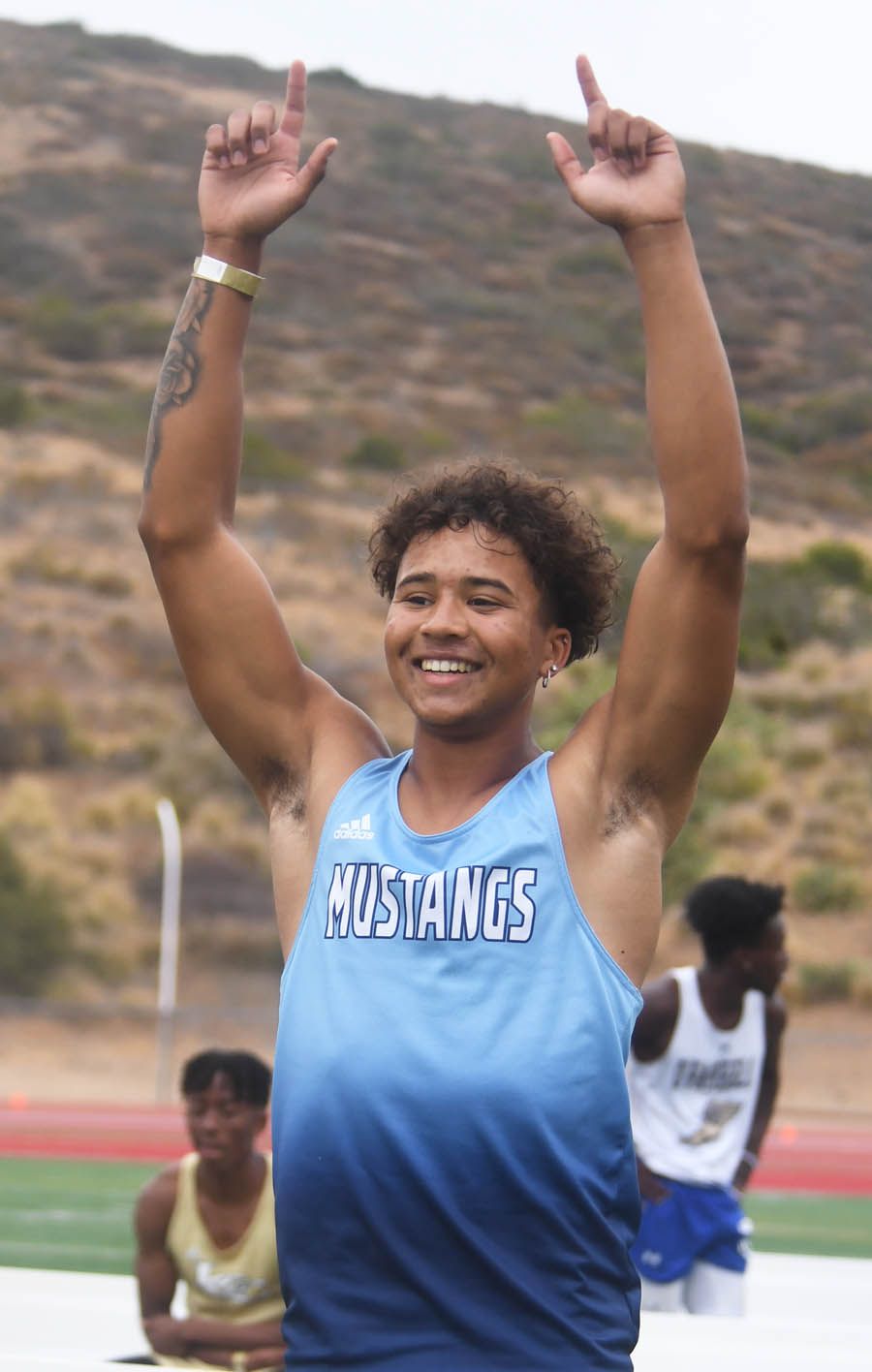 Both Martin and Brotschi competed in two individual events at last Saturday’s finals.
Martin, the Mesa League champion in the 110 high hurdles and 300 intermediate hurdles, qualified for the state meet in the 110 high hurdles with a time of 15.07 (second in the Division I field). He returned to the oval to place fourth in the division in the 300 intermediate hurdles with a time of 40.26. 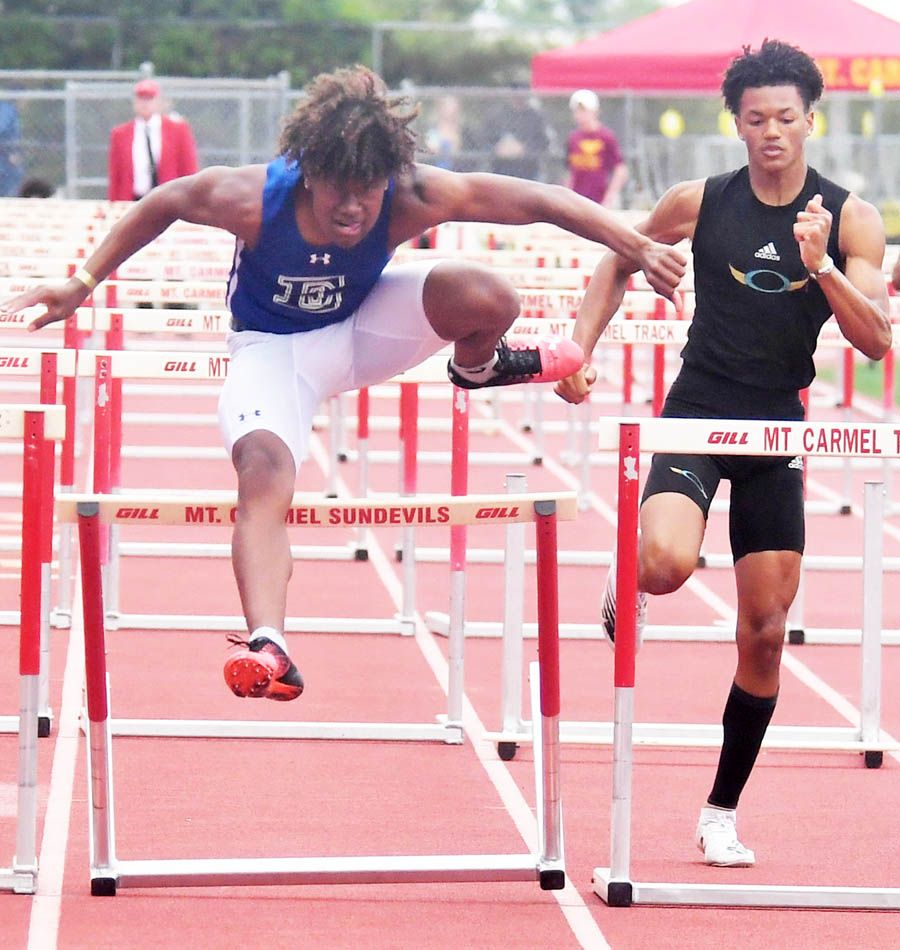 The Otay Ranch standout missed out by an incredible 0.01 second as Ramona’s Cash Jones logged 21.98.

Division II champion Bryce Brock from Cathedral Catholic topped the section field at 21.40 but bowed out of competing at the state meet, which opened the door for Jones (second in Division II) to move up and qualify. 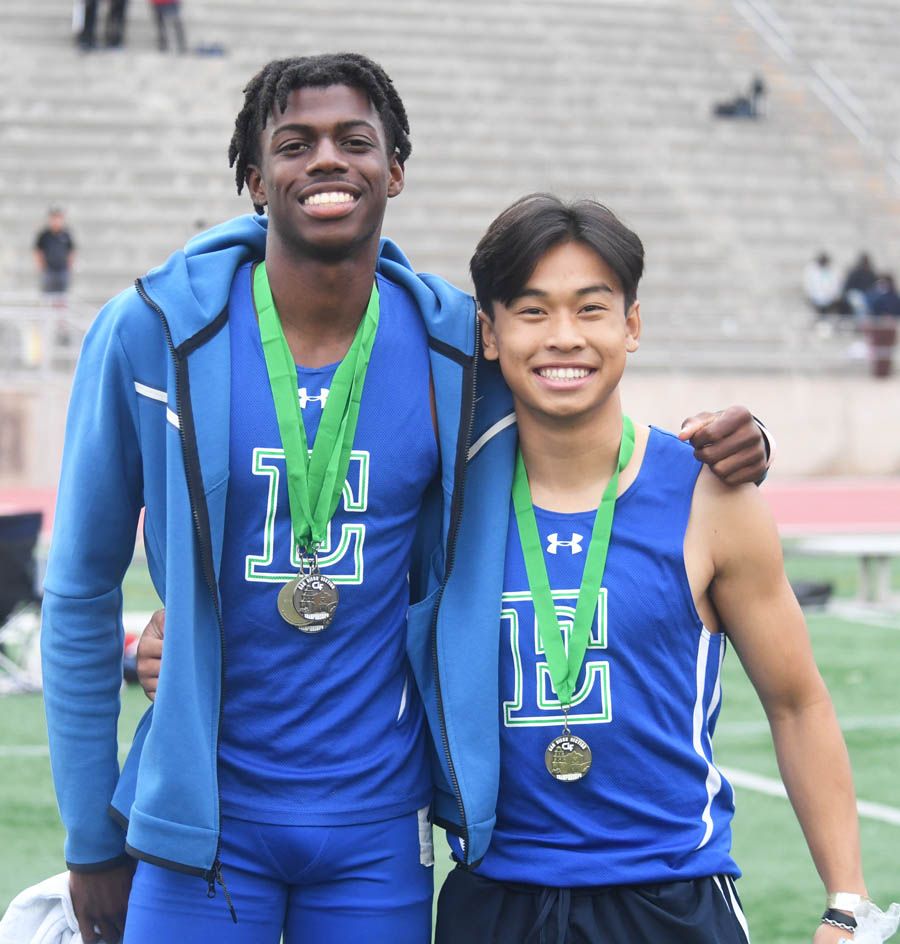 Buu, the reigning Mesa League triple jump champion, qualifies for the state meet for the first time despite winning last year’s Division I triple jump with a mark of 45-4.

He jumped 47-6 to win the event at this year’s league finals. 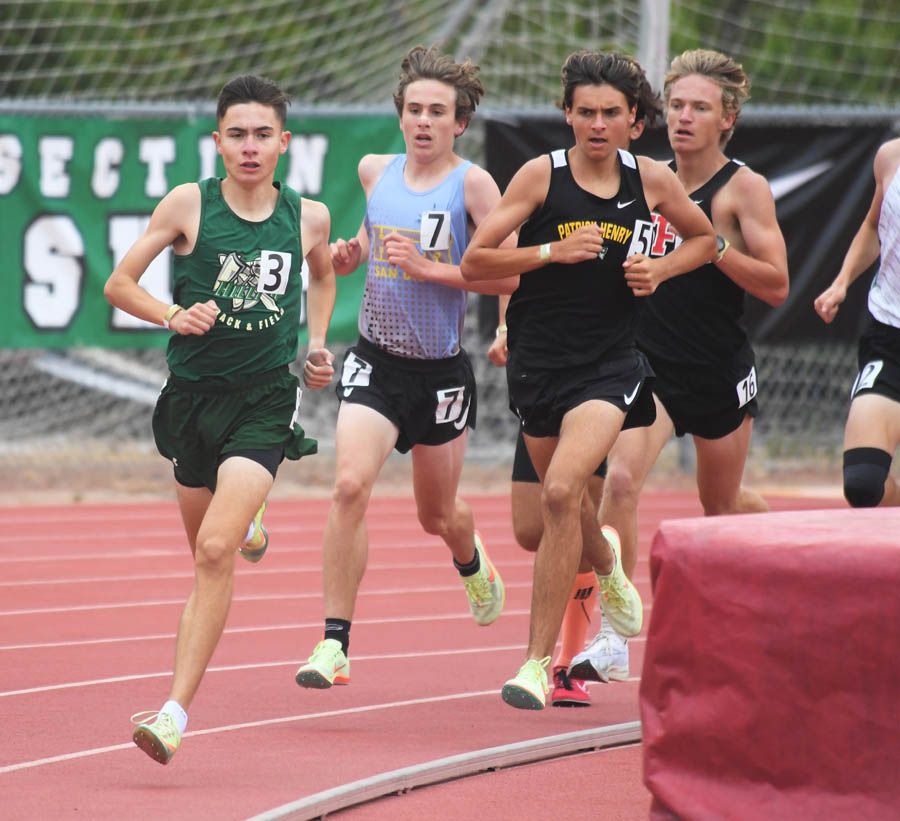 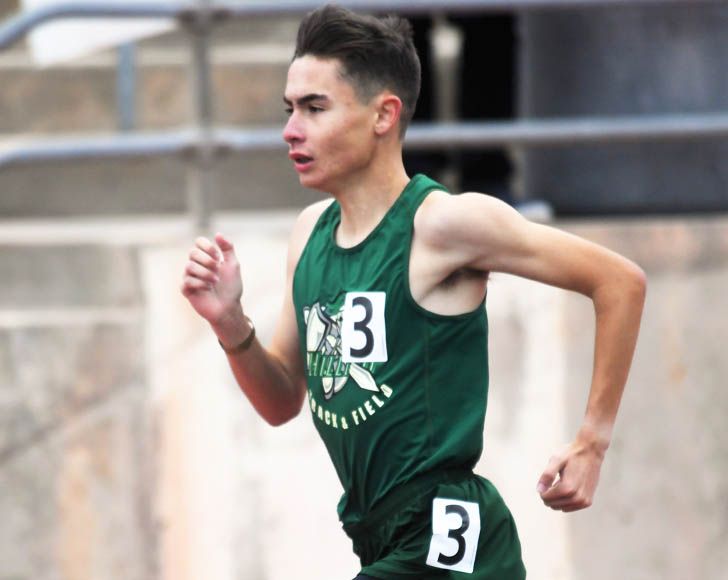 Santana will be represented in the girls long jump and triple jump by junior Jenna Fields.
Liberty Charter’s breakthrough to the state meet comes in the 1600 run via junior Micah Sanchez.

Of note, Steele Canyon finished sixth in the 29-deep Division I girls field and seventh in the boys field.

All but Peace qualified for the state meet.

Full-blown qualifying for the state meet marks a return to normalcy for the sport, according to Steele Canyon coach Charles Tyler.

“We had a full season and we had a lot of invitationals,” Tyler said. “Those Saturday meets were generally more competitive than the Thursday dual meets. We had an awesome chance to compete at a high level to help prepare us for CIF.” 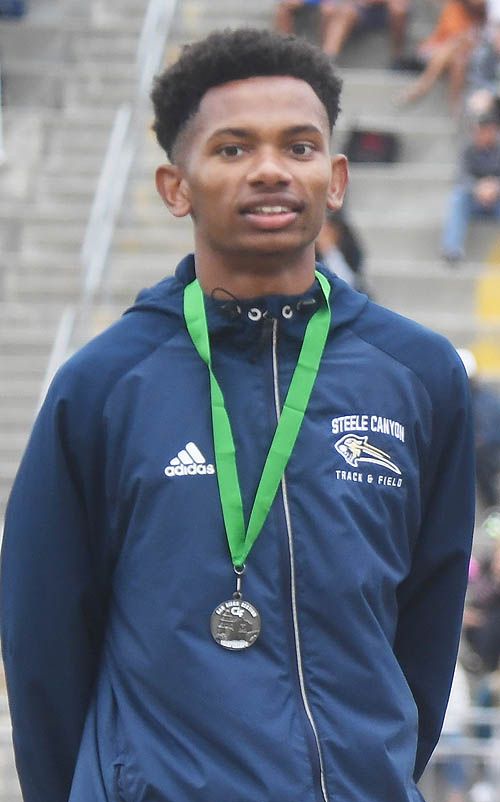 “I’m a little nervous,” Livingston admitted. “It’s my first time at state and coming in as a senior is a little overwhelming. But I’m ready to compete.”

She has the somewhat rare opportunity to compete at the state meet, to get all the jitters out, prior to her senior year.

“I’m so excited to go to state to see who I’m up against,” she said. “I’m even more excited to see my improvement for next year.”

Leon Gillis led the state with a mark of 6-9 earlier in the season.

“It was a good experience (qualifying for state) but the job is not finished,” he said. “I want to bounce back from this.”

Parker qualified to compete in three events at this weekend’s state meet: 4×100 relay, 400 dash and 4×400 relay. He won four events at the preceding conference finals: 200 and 400 dashes and both relay events.

“It feels good,” said Parker, who competes in football and track. “It’s what we worked for. We expected to go through. It feels like the hard work paid off. In the 400, I really stick to my race strategy and not get ahead of myself.”

“It’s all about focus,” Matovu said. “I came out with the mindset that I was going to win (the long jump) and I did it,” he said. “Putting in the work results in performance.”

Steele Canyon finished arrears of Helix in both the boys 4×100 and 4×400 relays at the conference finals.

Hear them roar
Division III provided a suitable spotlight for some of the section’s smaller programs at last Saturday’s section championship meet. 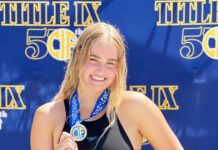