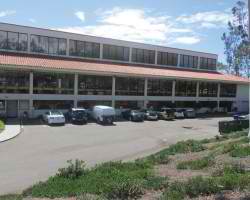 During the Chula Vista Library’s recent renovation — which included the expansion of its auditorium — Mayor Mary Casillas Salas toured the library and saw how much better it looked as bookshelves were moved away from the library’s windows creating a view of Friendship Park.

Casillas Salas said while the view into the park was beautiful, the view of the service driveway was a sore sight.
So the mayor came up with the idea to create an outside deck that reaches from the windows outward to cover the driveway.

She said the deck would serve multiple purposes. “First of all, it would have a prettier look, a prettier view because you’re not looking at the driveway,” she said. “Secondly, it’s such a beautiful space out there under the trees and all that, so I just thought a deck would be really pretty out there.”

Casillas Salas said the deck will be “my project as mayor,” adding that she hopes to see the project come to fruition by the end of her first term.

Casillas Salas estimated the cost of the deck to be $600,000 with fundraising efforts already under way. Last year’s library fundraiser, Ribbons and Shovels, was the first fundraiser for the deck, raising about $20,000.

A portion of that $20,000 was then used to hire an architect to create architectural renderings for the deck.
Rob Reinhardt, a retired city employee, is writing a fundraising plan for the mayor exploring ways to reach the $600,000 goal.

Casillas Salas has also been working with business and community leaders to gauge their interest in being on a committee to help Casillas Salas raise money for the library.

Casillas Salas said taxpayer money will not be used for the deck.

Library Director Betty Waznis said $600,000 could go a long way in funding various library needs such as obtaining more books, infrastructure and sewage repairs, and she sees the deck as a city amenity, not a library amenity.
Waznis said she supports the mayor’s project because it would make Friendship Park and the library integrated.
“We are thrilled that she (the mayor) sees the library as the heart of the community,” she said.

Stokes said Friends of the Library fully back the project because it will expand use of the library for the public.

“I think it’s continuing the beautification and the upgrades that are being made to the library,” Stokes said.

The first phase of the deck installation will be building out the area that’s closest to the children’s reading room. Then as additional money gets raised, they will add on to the deck, Casillas Salas said.

“What we envision the use of the (deck) to be is a public space,” she said. “So library users can enjoy it and take their books out there and read.”

Casillas Salas said she also envisions having a snack or a coffee cart on the deck.

“As we build the deck out, people may want to utilize it for events they have or maybe for live entertainment,” she said.

Preliminary plans show the deck holding a capacity of 250 people, the perfect size for a celebration, Casillas Salas said.
“I kind of envisioned it that you can even have a wedding reception there. It will be integrating the park with the library more than it is now.”

The renderings of the deck can be seen at the Chula Vista Civic Center Library at 365 F St.

“It’s going to be a wonderful expansion of public space and we need gathering places here on the west side,” the mayor said.