The seeding for this year’s San Diego Section football playoffs took on a decidedly different flavor with such teams as Cathedral Catholic left out of the elite Open Division and other teams such as Crawford receiving high seeds in the lower divisions.

But it all added up to one of the most exciting playoffs in recent memory. Last weekend’s second round of championship games underscored that.

In last Friday’s two games at Southwestern College, the Division III final was decided in the final minute as top-seeded University City shaded second-seeded Point Loma, 33-28, while the Division I championship game went down to the last 3.5 seconds showing on the clock as third-seeded Mater Dei Catholic pulled off a stunning 34-29 shocker against top-seeded Mission Hills.

The 2022 playoffs kicked off with the Open Division championship game at Snapdragon Stadium on Nov. 18. The match-up between top-seeded Carlsbad and second-seeded Lincoln did not disappoint the large crowd in attendance as the Hornets rallied from a 21-6 deficit with 22 points in the fourth quarter to post a 28-24 upset victory.

All section division winners advance to the Southern California regional playoffs.
State bowl championship games are slated Dec. 9-10 at sites across the state.

Fantastic finish
Mater Dei Catholic was bidding to capture its second consecutive CIF division championship en route to earning a berth in this year’s Southern California regional playoffs and a chance to win a second state title in as many years.

The Crusaders opened scoring in the game as junior Anthony McMillian Jr. scored on a 17-yard run after the reigning Metro-Mesa League champions had opened the game by recovering a fumble on Mission Hills’ first offensive play.

Mater Dei Catholic advanced the ball 10 yards from the 27-yard line before McMillian romped into the end zone.

The Crusaders held the lead in precarious fashion until Mission Hills senior Santiago Salas squeezed his way into the end zone from two yards out to tie the game, 7-7, with 5:59 to play in the second quarter.

The Mater Dei Catholic defense came up huge prior to that when Crusader D.J. Overstreet fumbled a punt that placed the ball at the 17-yard line following a recovery by senior Axel Navarro. But the Grizzlies were stymied when the ball was intercepted the end zone as Mission Hills junior quarterback Keaton Smith attempted to thread the needle to a receiver.

There was certainly no lack of drama throughout the game.

A series of punts backed up Mater Dei Catholic to its own three-yard line, forcing the Crusaders to kick from their own end zone.

The Grizzlies had a short field to work with after starting at the Mater Dei Catholic 40 following the catch. The North County squad later used the field position to its advantage in eventually scoring the game-tying touchdown.

The Crusaders countered with a drive to the Mission Hills 13-yard line but junior Ricky Osuna’s 30-yard field goal attempt was blocked and the ball returned 55 yards to the Mater Dei Catholic 35-yard line with 1:51 until halftime.

The Grizzlies advanced the ball to the two-yard line before being thrown back for a loss to the five-yard line. But the Mission Hills offense was persistent and junior Andy Devine Jr. eventually crossed the goal line with 30 seconds left in the second quarter on a one-yard run. The point-after-touchdown conversion by senior Jonathan Reyes lifted the Grizzlies to a 14-7 halftime lead.

The Crusaders received the second half kickoff and tied the game, 14-14, on a 17-yard scoring pass from senior quarterback Dominic Nankil to senior Jerry McClure with 9:07 to play in the third quarter.

Mission Hills regained the lead at 17-14 on a 43-yard field goal by Reyes two minutes later. Reyes followed that up with a 29-yard field goal later in the quarter to make the score 20-14 as the Grizzlies appeared to be playing on a short field.

Another muffed punt led to Mission Hills taking over possession at the Mater Dei Catholic 18-yard line. Incredibly, the Crusaders defense held to keep the game within reach as Reyes notched his third field of the game – this time from 28 yards out – to up the Grizzly lead to 23-14.

But the game was far from over as the nighttime chill began to settle on 4,500 fans in DeVore Stadium.

McMillian took a short pass from Nankil (305 passing yards, three touchdowns) and turned it into a 51-yard catch-and-carry touchdown with 6:27 to play in the fourth quarter to narrow the score to 23-21.

A thrilling finish was thus guaranteed.

The Crusaders benefited from a short punt to the Mission Hills 42-yard line. The Mater Dei Catholic running game was going at full tilt at this point and McMillian (18 carries, 138 yards) bounced off bodies in carrying the ball into the end zone with 2:04 to play in regulation to put the South County giants in the lead at 28-23.

Smith promptly launched a bomb to senior Henry Davis to position the ball at the MDC 36-yard line. It’s not what Crusader fans wanted to see and even less so when senior Lucas Scott later scored from 15 yards to place the Grizzlies (9-4) in front by a score of 29-28 following an unsuccessful two-point conversion.

But there’s more suspense in this story.

The Crusaders (9-4) received the ball with 1:25 left and appeared to take their time coming to the line of scrimmage in running nearly 30 seconds off the clock.

It got worse and then the heavens smiled on them. Backed up to their own five-yard line because of a penalty, the Crusaders somehow managed to get the ball out to the 45-yard line with 29.9 seconds left on the clock with no timeouts remaining.

It was a daunting task, but the spirit seemed willing.

McClure made a catch and a quick Nankil spike stopped the clock with 16.5 seconds left at the Mission Hills 37.

It was Overstreet’s turn to catch a sideline toss and get out of bounds at the 30-yard line with 11.4 seconds remaining.

Mater Dei Catholic would be facing a possible 47-yard game-winning field goal if the next play didn’t work.

Not impossible but the Crusaders still had time for one last shot at the end zone and they took it, risking a game-ending interception. 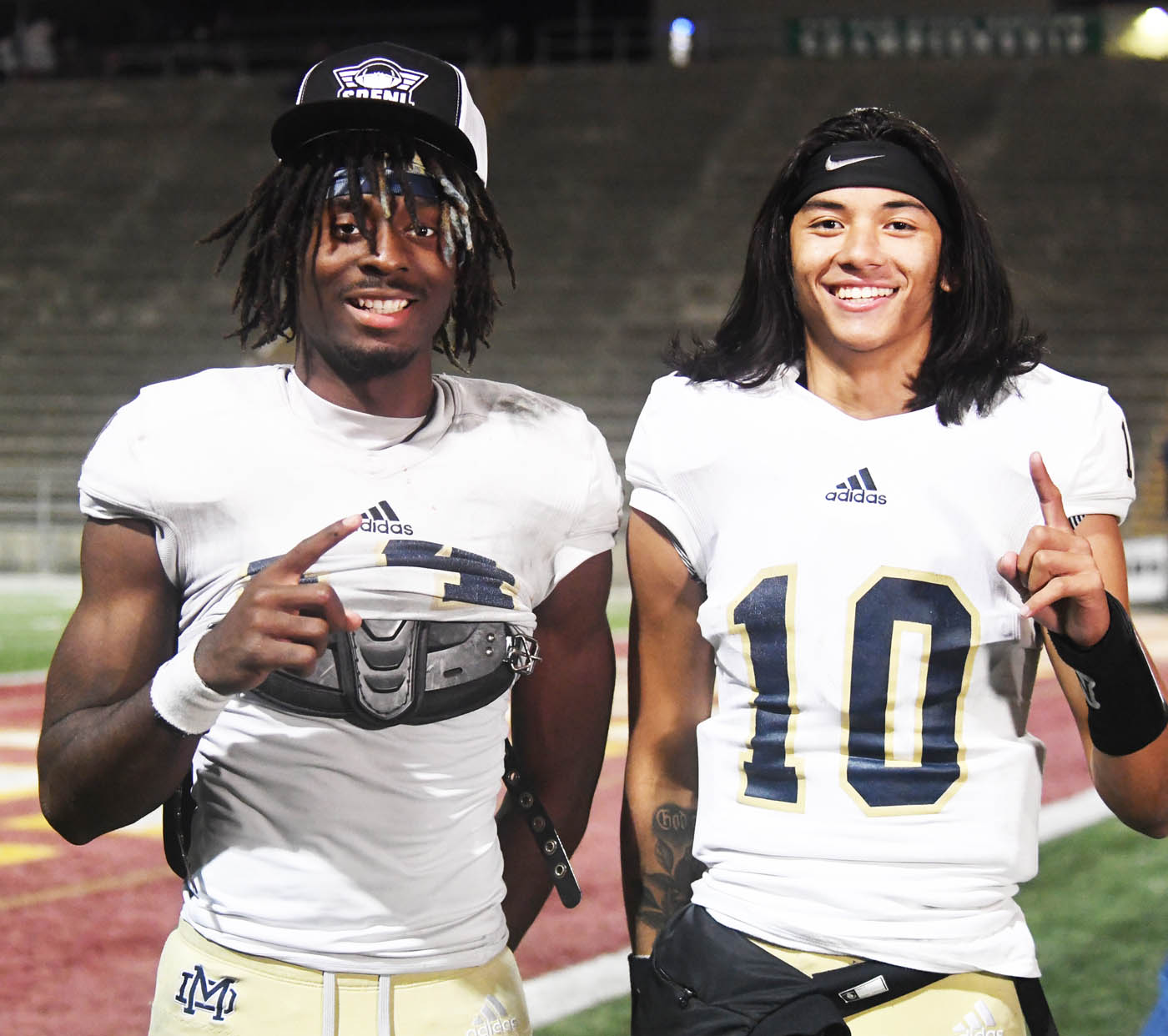 Nankil’s pass was high and went up for grabs between as many as three players battling for position at the back of the end zone.

There was little question that McClure caught the ball amid a maze of hands and arms. The question was just a matter of where his feet came down.

After several minutes, which seemed like an eternity to both fan bases, the officiating crew reached a decision.

McClure’s feet had indeed come down inside the back of the end zone. “I saw red,” said the UCLA-bound receiver, who finished the game with 127 yards and two touchdowns.

Crusader players predictably erupted in joy while several Mission Hills players dropped to their knees in disbelief – and despair.

After another lengthy timeout, the teams finally assembled for a two-point attempt. Nankil’s pass was caught out of bounds to cap Mater Dei Catholic’s lead at five points.

The Grizzlies would get the ball back. The problem was that there was only 3.5 second left in the game.

Mission Hills had time for just one play after receiving the kickoff. Players meandered to the sideline with what looked like an idea of using a series of backward passes to move across the field. But the Crusader defense would have none of that and the last Mission Hills player with the ball was tackled within a short distance.

End of game. The victory celebration began in earnest.

“We had the confidence that when we got to a certain area of the field that we could kick a field goal to win it,” Mater Dei Catholic head coach John Joyner said. “But with 11.5 seconds left, we still had one more shot. It was one all-CIF player to another all-CIF player.
“We tried to give it away many times, but the kids kept their composure. It was just one more play.”

“It told Dom I would go to the back of the end zone and if I got open, for him to throw the ball to me,” McClure said. “I wasn’t leaving without a ring.”

Soaring Eagles
Granite Hills waited 43 years since its last appearance in the CIF finals to finally claim a division title.

“I’m really proud of how this team has come together,” said Eagles coach Kellan Cobbs, whose team will host Etiwanda in the Division 2-A state playoffs this Saturday. “We have a lot of really good players on our team and they have all bought into team First and have been very unselfish. They played very physical on Saturday night and did a great job of creating some turnovers. We met our team goal for the season of winning a CIF championship the rest of the season is just icing on the cake.”