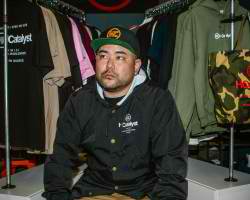 Chula Vistan Russell Takashima’s initial foray in the clothing business did not go as planned.

His first clothing line Pixl PPL that he started years ago, was reaching its peak before Takashima, a rookie business owner then, pulled the plug on the whole operation.

“That was going pretty well but it started growing so fast that it was kind of scary to me, so then I completely backed out,” he said. “Someone contacted me from Hong Kong and they wanted to do a big order and then I just got really scared. I wasn’t ready for it.”

“I was just a guy with a box of shirts and I was just trying to sell them to friends and family. It kind of had the ability to get too big and I just got really scared so then I just stuck my hand in the sand.”

Takashima, 39, learned from that experience and is back to designing and selling clothing for his new clothing line Human Catalyst, which he describes as “clothing for the California lifestyle.”

Initially he started selling Human Catalyst online and at events. But he quickly developed a following, which lead to the opening of the Human Catalyst storefront in downtown Chula Vista at 260 Third Ave. that opened in July.

“It’s about a human being that could either cause change in others or also a person that could be changed, life affected by a human catalyst,” he said. “It’s about the ability to help others.”

He said the name is meaningful for him. In his life, he said he has crossed paths with people who have changed the path and direction of his life. He said he wants to give back to the community with this clothing line.

He said he wants to live up to the Human Catalyst name by being a change for the community. He said one way he is doing this is by keeping his store open for anyone to come in who just wants to talk or seek life advice.

“I’ve come across a lot of kids that are out here that don’t seem to have any direction necessarily or maybe they are out a little too late. They could easily  stray,” he said. “I would love to be here for them they could ask me questions and maybe one day if things go well I can employee them,”

Currently Takashima has no employees.  With the help of his wife, Takashima does everything on his own such as operating the store on a shoe string budget and designing and manufacturing the clothing.

Takashima said the ultimate goal with the Human Catalyst brand is to make a difference in the community.

“The merchandise and everything that is fantastic,” he said. “I would love to sell it in order to keep the lights on and the doors open but my biggest goal is to be able to move this product and then have some funding in order to do something to help people.