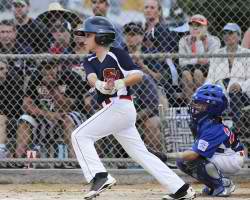 Staring at a 2-1 deficit against District 66 champion Valley de Oro heading into the bottom of the sixth inning, Sweetwater Valley appeared all but headed for a championship game replay, especially when the District 42 champions found themselves down to their final out.

But shoddy play by Valley de Oro and an untimely throwing error allowed Sweetwater Valley to resurrect itself from the grave to post an unlikely — and thoroughly dramatic — 3-2 victory to lay claim to this year’s section banner.

Sweetwater Valley entered the top of the sixth inning nursing a narrow 1-0 lead despite struggling at the plate for most of the game. The District 42 champions managed to scratch out a single run and that seemed to be enough behind SVLL pitcher Nico Libed, who had held Valley de Oro scoreless through the first five innings.

However, Valley de Oro tied the game on a ground-rule double in the top of the sixth inning and plated another run to knock Libed from the mound.

Diego Magallon entered the game in relief and managed to prevent further damage.

Libed surrendered two runs but struck out 10 batters, walked two and surrendered three hits during his time on the hill.
Valley de Oro might have gone up by two runs in the top of the sixth inning except for an appeal that negated one run.

Sweetwater Valley players made what Besker termed “a bang-bang play” on a sacrifice fly to the left field fence that proved critical to the team’s come-from-behind win. The play started with Ty Besker in left field throwing to Libed at the cutoff. Libed threw a laser to home plate where Hunter Stencil put down a sweep tag.

The Valley de Oro runner was initially called safe as he just beat the tag. However, the elder Besker appealed the play and the runner was called out for missing home plate as he slid by Stencil’s tag.

Valley de Oro would score the go-ahead run on the next pitch, however.

Sweetwater Valley entered the bottom of the sixth inning trailing by one run. Stencil reached base with a walk and was replaced with a pinch runner. An error ensued on the next play, with runners safe at first and second bases.

A fielder’s choice produced one out and a strikeout followed for two outs.

Facing a 3-2 count, Glen Huggins then hit a nubber to the pitcher but the throw to first base to apparently end the game — and force a championship rematch between the teams — glanced off the first baseman’s glove and rolled toward the fence. That allowed the two base runners — Jayson Smith and Jeremiah Cook — to score on the two-run throwing error and push Sweetwater Valley to a miraculous finish to steal the section banner.

Magallon recorded the win in relief for Sweetwater Valley, which finished 3-0 in section play.

Sweetwater Valley improved to 2-0 in the four team double-elimination tournament.

Sweetwater Valley jumped out to an early lead on Cajon De Oro with six runs in the first three innings to put the game away early.

An RBI triple by Elijah Cook (his eighth in all-star tournament play), an RBI single by Nicholas Fahme (his ninth), a three-run home run by Hunter Stencil (his fourth home run to go with 15 RBI), and an RBI single by Ty Besker (his eighth RBI) in the second inning supplied the early offense for Sweetwater Valley.

Dominic Nankil also had a hot bat for the District 42 champions. He went 3-for-4 and scored two runs. He singled in the first and second innings and tripled in the fourth inning.

Nico Libed brought the heat against Cajon De Oro during his outing. Cajon De Oro managed just two hits off Libed, who allowed no earned runs, walked one and struck out six (20 strikeouts overall in all-star duty) during his three-and-one-third innings of work.

Sweetwater Valley LL increased its lead with three runs in the fourth inning. A sacrifice fly scored Nankil for the inning’s first run.

In fact, Sweetwater Valley’s 12U team did even better by winning its opening two games to advance to Friday’s section championship game.

Kyle Chapman’s two-run home run in the first inning boosted CV American to an early 2-0 lead over Calexico. CVA went up 7-3 on the strength of a five-run third inning and tacked on four more runs in the top of the fifth inning to zoom in front 11-3. The teams then traded two runs each in the two innings.

CV American sent nine batters to the plate in the third inning, trying the game on a bases-loaded walk to Aaron DeCasas, scoring two runs on wild pitches, another on a double steal and one run on a RBI-single by Christian Lizarraga.

DeCasas, the second of five CVA pitchers in the game, picked up the win.

Sweetwater Valley hit eight home runs in the game and now has hit 31 home runs in six games while out-scoring its opponents 109-6. The District 42 champions have only allowed 10 hits in six games. Andrade and Mendez each pitched two innings on Wednesday. They gave up a combined three hits.

All six games have ended after four innings due to the mercy rule.

Rancho SD’s win in the 11U section opener also featured standout hitting. Paolo Medina hit a grand slam home run in the first inning to help power the Dawgs to an early 5-0 advanrtage while Wyatt Laub hit a walk-off two-run shot to end the game by virtue of the 10-run mercy rule.

Laub started the game, with Ethan Heider earning the win in relief. Weston Clark scored three runs for RSD in the blowout win.


There’s no doubt that Sweetwater Valley Little League 10U all-star team received its share of competition in this year’s California District 42 tournament before emerging with the championship banner.

Sweetwater Valley won its opening two games in this year’s eight-team double-elimination tournament to advance to the winners bracket final against a likewise undefeated Imperial Beach team on July 9. Imperial Beach won, 6-3, in a seven-inning nail-biter to secure a berth in last weekend’s championship game.

“After losing to Imperial Beach in the winners bracket game, I told the kids we had a big task ahead of us,” SVLL manager Kelly Besker explained. “We had to beat Eastlake a second time to get to championship on Saturday. We had to win three games in three days to win the whole thing. I told them we were a good enough team to get those three wins, but that they needed to play baseball the way they were capable of playing. If they played good sound baseball like they knew they could, we would be holding up a championship banner.”

The competition was on, in other words.

“We beat Eastlake and we knew we had an opportunity to show Imperial Beach we deserved to be in the championship games,” Besker said. “We went out and pretty much dominated the Saturday championship game. The kids were hungry and fired up to get the win to move onto Sunday’s ‘if game.’

“Before the game Sunday we spoke to the boys in the dugout about breaking the game down into single-inning games — the idea is to win more of those innings than the other team. I told them how proud I was for them playing their way into the championship game.

“This was one of those small times in life we will look back on and remember for getting to the championship game. I told them how much I enjoyed watching them play baseball together and how proud I was to be involved in a small part of their lives as their baseball coach.”

Saturday’s game was decided quickly as Sweetwater Valley exerted its will to win with nine runs in the first three innings.

A three-run home run by Stencil in the first inning and a two-run single by Nicolas Fahme during the second inning supplied the team’s early offense.

Stencil racked up three RBI on three hits for SVLL in the game.

Nico Libed allowed one run over two-and-two-thirds innings. He struck out three, walked none and surrendered two hits.

Sweetwater Valley defeated Imperial Beach in a shootout on Sunday to win the district championship. The teams lit up the scoreboard by combining for 23 runs.

The elder Besker noted that hitters on both sides were strong at the plate, as the teams combined for 26 hits, including seven extra base hits. Sweetwater Valley racked up 15 hits, including four extra-base hits.

Sweetwater Valley scored three runs in the top of the first inning, braced by a by a two-run home run by Stencil, but IB held a 6-3 advantage after plating six runs in the bottom of the second inning.

The teams traded runs for most of the contest, leading to five lead changes in the game.

“We began playing and there was a shift in momentum early — first for us and then against us,” the SVLL manager said. “The kids showed great resilience and a never-give-up attitude as they kept plugging along and chipping away, and eventually got the job done. They have great character and have come together very well as a baseball team. Sunday was another great team win to win the district championship.

“We will move forward and continue to strive to win one inning at a time in our quest to win the Section 7 championship.”

Kasey Regala got the win in relief for Sweetwater Valley by pitching three innings while allowing one run. Libed, Nankil, Stencil and Fahme combined for eight hits and six RBI.