California District 42 made it six-for-six at this year’s California Section 7 championships — a history-making first for the Little League organization.

Sweetwater Valley won the 12U division while Park View won the Junior Division.

Sweetwater Valley swept titles in both the Intermediate and Senior divisions.

Two divisions — 11U and 12U — were extended to the double-elimination stage.

It was a milestone moment for district administrator Ernie Lucero.

“Since I became district administrator for California District 42 Little League baseball in 2008, this is the first time that we have won in every division in the sectional all-star tournament — Senior, Juniors, Intermediate, 12s, 11s and 10s,” Lucero said. “We had representation for the Little League’s divisional all-star tournament from six leagues in our district from the South County, a step closer to the world series for some divisions.

“Deciding where to drive and watch our teams play has been a challenge, but it’s a very good problem to have.”

Sweetwater Valley’s Senior and Intermediate teams did not make it out of the Southern California regional tournament. SVLL’s seniors finished 1-2 while the intermediates finished 3-2 on a more brighter note.

“Our Park View Junior team was eliminated during the double elimination tournament,” Lucero said. “These 13-14 year-old teens did not disappoint. Their final record was three wins against the two loses.”

11th heaven
Eastlake started its run in the District 42 tournament with a 10-0 statement victory against returning champion Park View. Saul Gross pitched a two-hitter, catcher Isaiah Cortes allowed zero passed balls and zero wild pitches and second basemen Joey Ziomek turned two double plays to limit Park View to only one runner advancing to second base and none to third base in the game.

Eastlake started the Section 7 tournament with a tough loss 4-2 to California District 41 champion Rancho De Oro Little League on July 16. The team charged back with a 15-0 victory over Lemon Grove Little League, however, on July 18 supported by a complete game shutout from pitcher Jaziel Gonzalez.

In order to win the section championship, however, Eastlake had to defeat Rancho De Oro twice in the tournament’s double-elimination format.

In the first game, on July 19, Eastlake shook up its lineup and moved Dante Baca to the No. 3 spot in the lineup. Baca went on to lead the team offensively going three-for-four with a walk and three runs scored. Eastlake won the game 15-2 to force another game.

In the Section 7 championship game on July 21, Malaki Maestas opened the scoring by hitting a home run directly over the left field foul pole to give Eastlake a 3-0 lead in the second inning. Starting pitcher Ryan Nicolaus held Rancho De Oro to two runs while Gross closed the door to secure a 9-2 victory for Eastlake and this year’s section banner.

In the first game of the Southern California Tournament on July 23, Eastlake defeated Conejo Valley, 15-1, led offensively by Hunter Piring, who went four-for-four. Acosta, the starting pitcher, set the tone defensively by striking out the side in the first inning.

Throughout the run, “team baseball” has been the key to success, according to the coaching staff. Nowhere has that been more apparent than off the bench, manager Matt Fischer said.

“The Eastlake 11U team epitomizes this statement,” Fischer said. “Logan Boliguen, Zakai Castruita, Logan McElroy and Braylen Martinez have all made tremendous contributions to the team coming off the bench. In more than half of the team’s games, the bench has been perfect offensively. Boliguen has led that productivity off the bench by going 8-for-12 with one walk in crucial situations.”

Overall, Eastlake had outscored it opponents 102-13 in nine games while averaging less than one error per game. The team had stuck-out opponents 57 times.

Park View’s season ended with a 15-5 loss to Redondo Beach on Tuesday.

12U: On the road
Sweetwater Valley appeared in good working order by capturing its opening two games at the SoCal regionals by 12-0 and 7-0 shutout victories.

The game ended when Sweetwater Valley scored seven runs in the fourth inning to enact the 10-run rule.

Johnson pitched three and two-thirds innings, allowing two hits while striking out six batters. He and Roman Murphy (one third of an inning, one strikeout) combined on the shutout win.

Sweetwater Valley played a regulation six-inning game against La Mirada on Sunday, out-hitting its opponent 9-4. The District 42 champions nursed a 4-0 lead into the final inning before tacking on three  insurance runs.

Joel Vargas and Maelo Forrero both had two RBI while Johnson and Nico Villa both had one RBI. Forrero had a double while Johnson and Vargas both hit home runs. Johnson finished the game with five total bases while Vargas had four.

SVLL (10-2) dropped its third game in the tournament, 3-2, to Glendora American on Wednesday to fall to the elimination bracket. Trailing 2-0 early, Vargas hit a two-run home run to tie the game, 2-2, in the middle stages of the contest.

The District 42 and Section 7 champions will face District 62 champion Huntington Valley in an elimination game on Thursday at 5 p.m. The winner advances to meet the Eastvale-Encinitas winner on Friday.

For Sweetwater Valley to win the SoCal championship and advance to the Little League World Series West Region tournament, it will need to win five consecutive games.

That number was down to four consecutive wins after Thursday’s 6-4 victory.

Sweetwater Valley, which improved to 11-2 in all-star tournament play, will face District 31 champion Encinitas in an all-San Diego County elimination game on Friday at 7:30 p.m.. The winner advances to Saturday’s losers bracket semifinal.

Encinitas eliminated District 72 champion Eastvale by a score of 10-0 on Thursday.

The road continued for the District 42 champions with a 3-0 win on Friday. “It was a great game of baseball,” the SVLL manager said.

CVA now sits in some pretty elite company after advancing to Sunday’s championship game, the last stop in Little League International for this age-group.

CVA will finish either first or second in the Southern California region after battling Palos Verdes in a rematch after Palos Verdes topped Dos Pueblos in Saturday’s elimination contest. First pitch is at 11 a.m. at the Imperial Beach Little League complex.

Evan Bortscheller pitched a gem of game going 4.1 innings, striking out nine, allowing only four hits and one walk in helping catapult his team to Sunday’s regional final.

The CVA defense once again was stellar in that there were no errors, a great defensive play by second baseman Israel Mejia to end a fifth-inning scoring threat by Palos Verdes (runners on first and second base, two out),” Chula Vista American manager Sergio Feria explained. “Also, a key sixth-inning double play executed by CVA to clear the bases with Palos Verdes again threatening to score.”

Offensively, CVA has scored 82 runs in the 10 games.

“CVA is not done,” Feria said. “The Tournament continues, and CVA has more work to do. Keep working, keep winning.”

Owing to the tournament’s double-elimination format, an “if necessary” game would be played Monday at 6:30 p.m. should Palos Verdes come up victorious on Sunday.

Chula Vista American absorbed its first loss of the State Tournament on Sunday, losing to Palos Verdes 4-1. The win by Palos Verdes forces a second championship game on Monday in the double elimination tournament, with CVA (10-1) having previously defeated Palos Verdes on Friday, 5-0.

Bennet Lopes, for Palos Verdes, pitched 4.1 outstanding innings. He allowed only three hits, struck out seven, walked one to tame the bats of Chula Vista American.

Monday’s game will be the third matchup between the teams in the SoCal state tournament with the teams squared off at a win apiece.

A Southern California Champion will be crowned Monday evening — either Chula Vista American or Palos Verdes. Game time is 6:30 p.m. 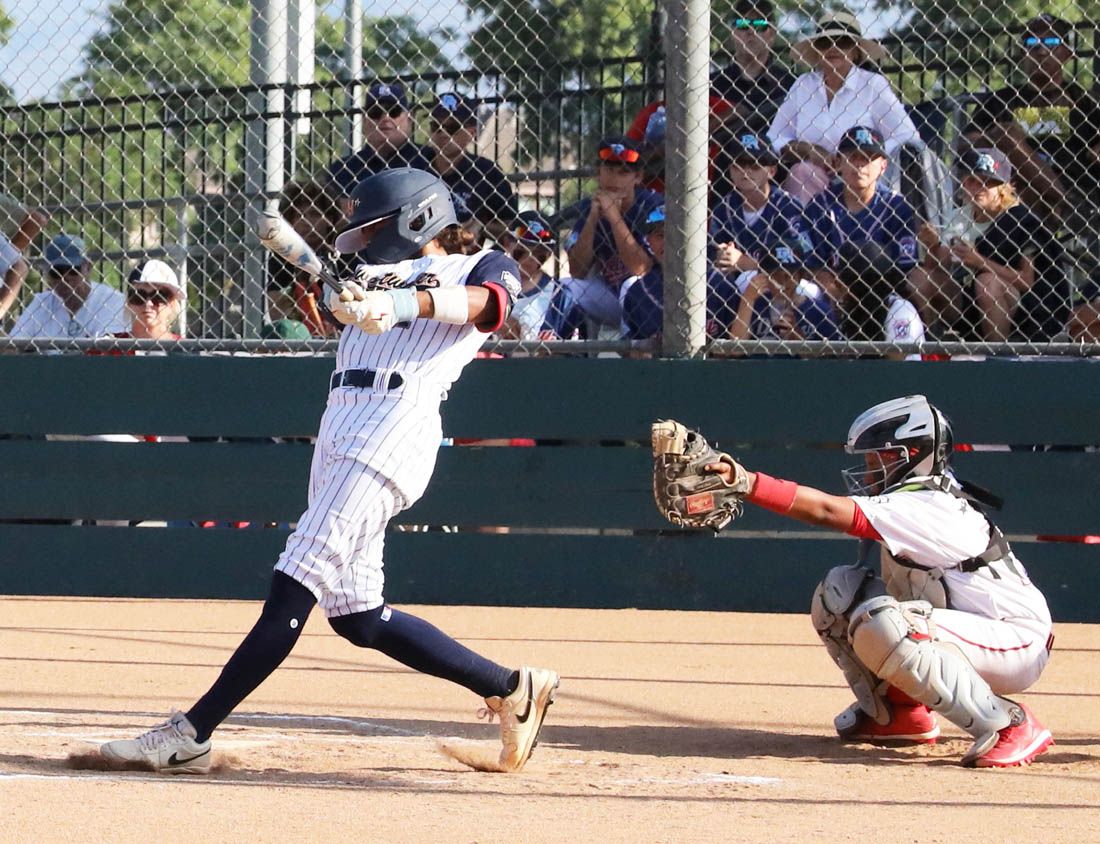 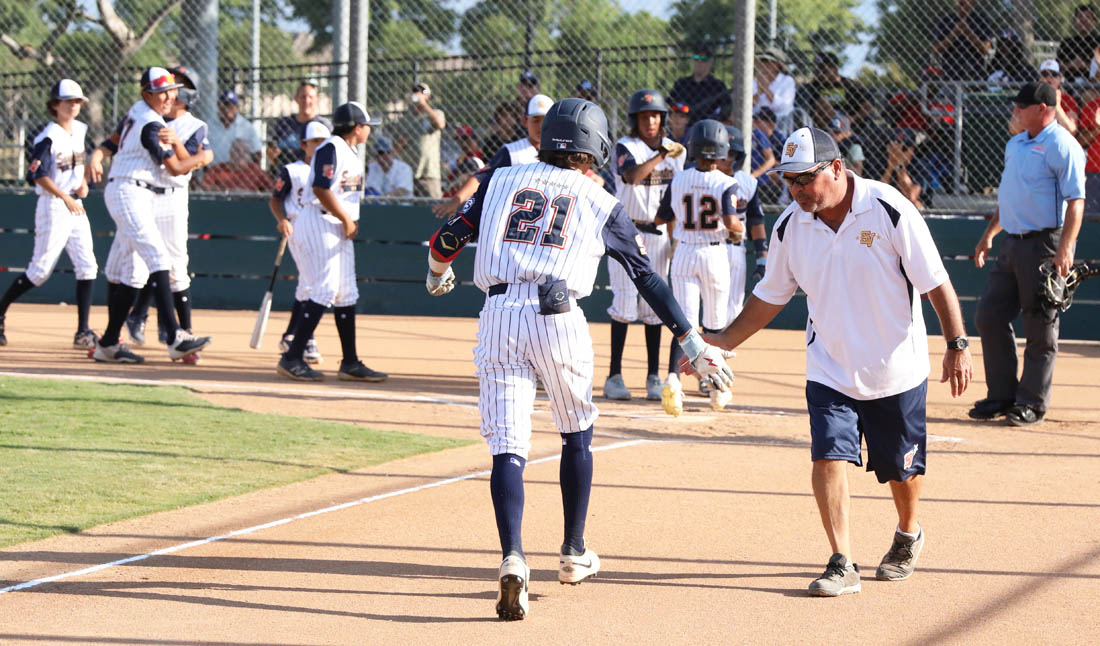 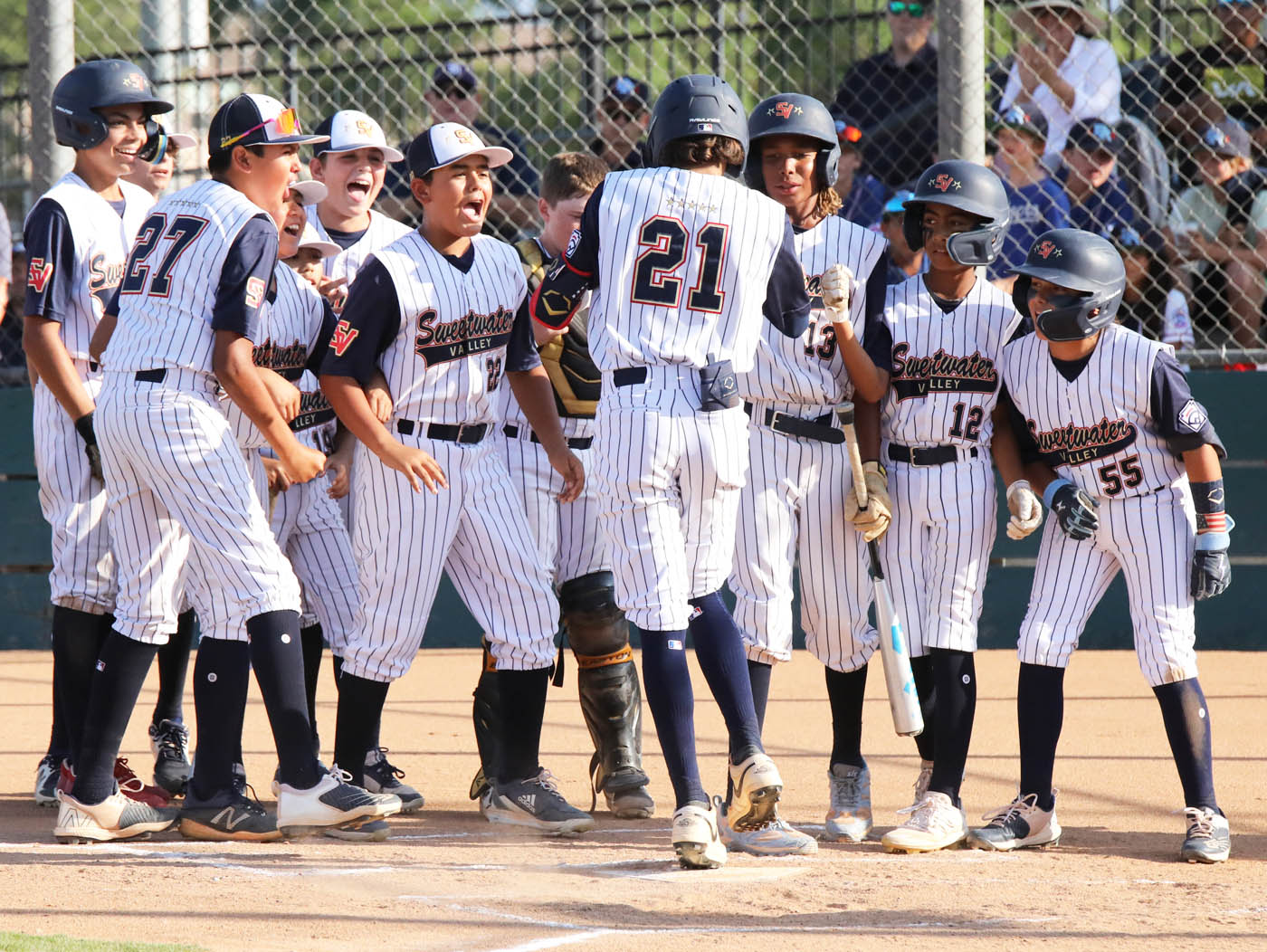 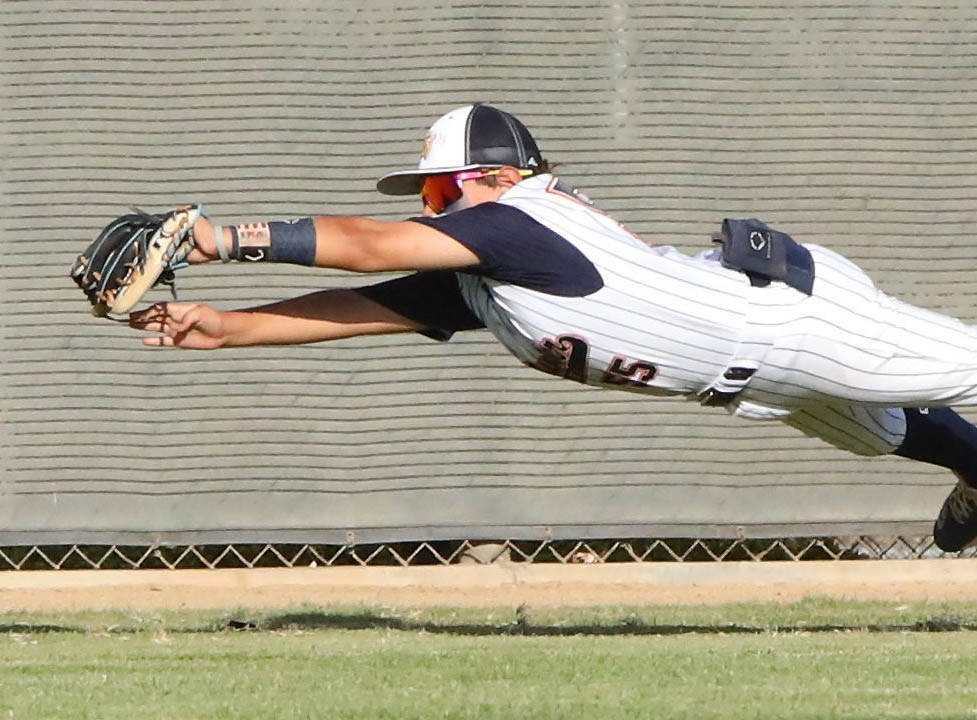 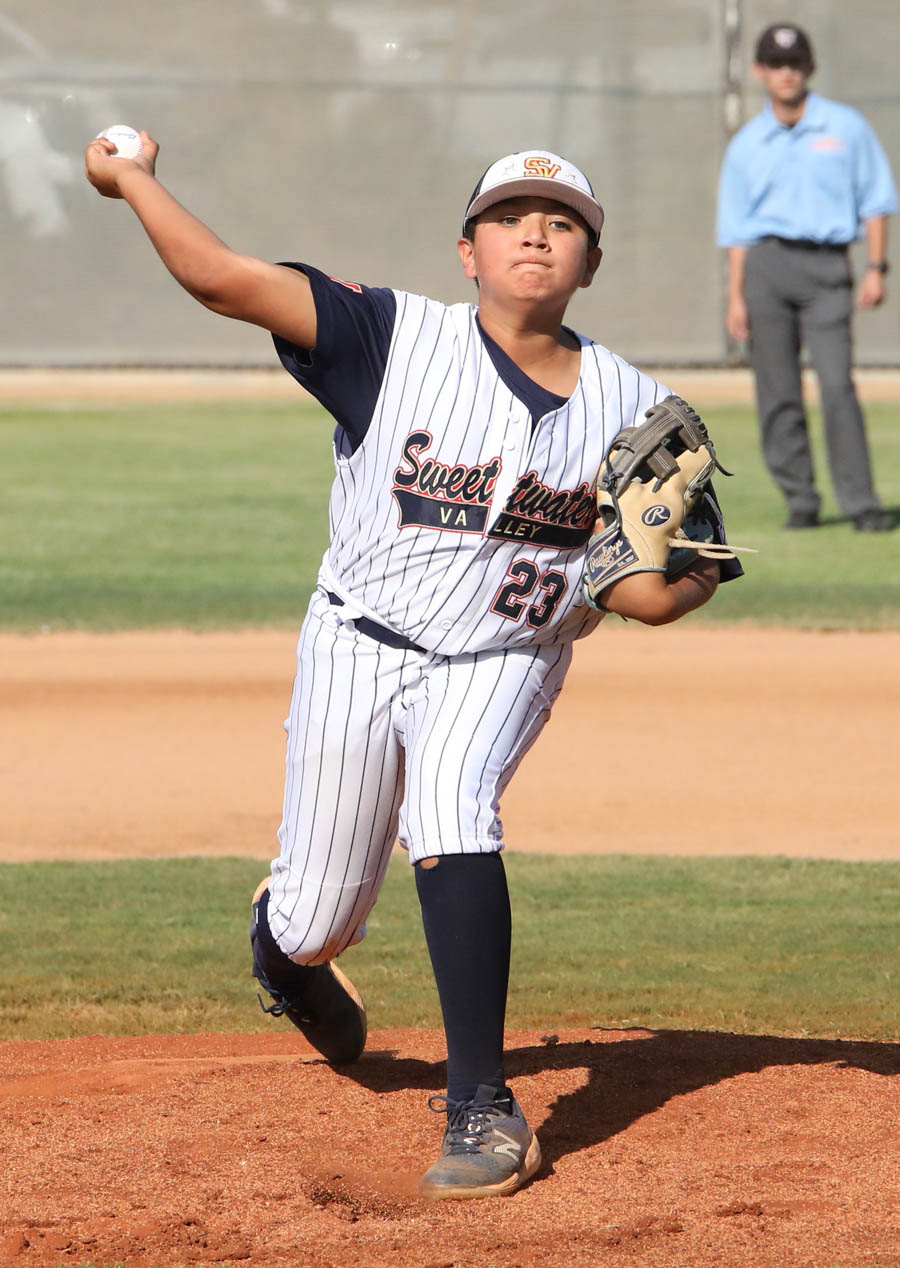