Olympian began its playoff odyssey after winning the South Bay League championship with a 7-1-2 league record. The Eagles’ lone loss came May 11 in a 4-1 setback to San Ysidro. Olympian tied San Ysidro, 1-1, on April 15 and deadlocked 0-0 with Chula Vista on May 4.

The Eagles got back on track with a 4-1 win at Otay Ranch on May 13, then won three consecutive contests in the playoffs to win the program’s first CIF championship.

“These boys worked very hard all season,” Olympian coach Ivan Gonzalez said. “They are a very focused, talented group. It was fantastic. I’m happy for them to put the work in and see the results on the soccer field.” 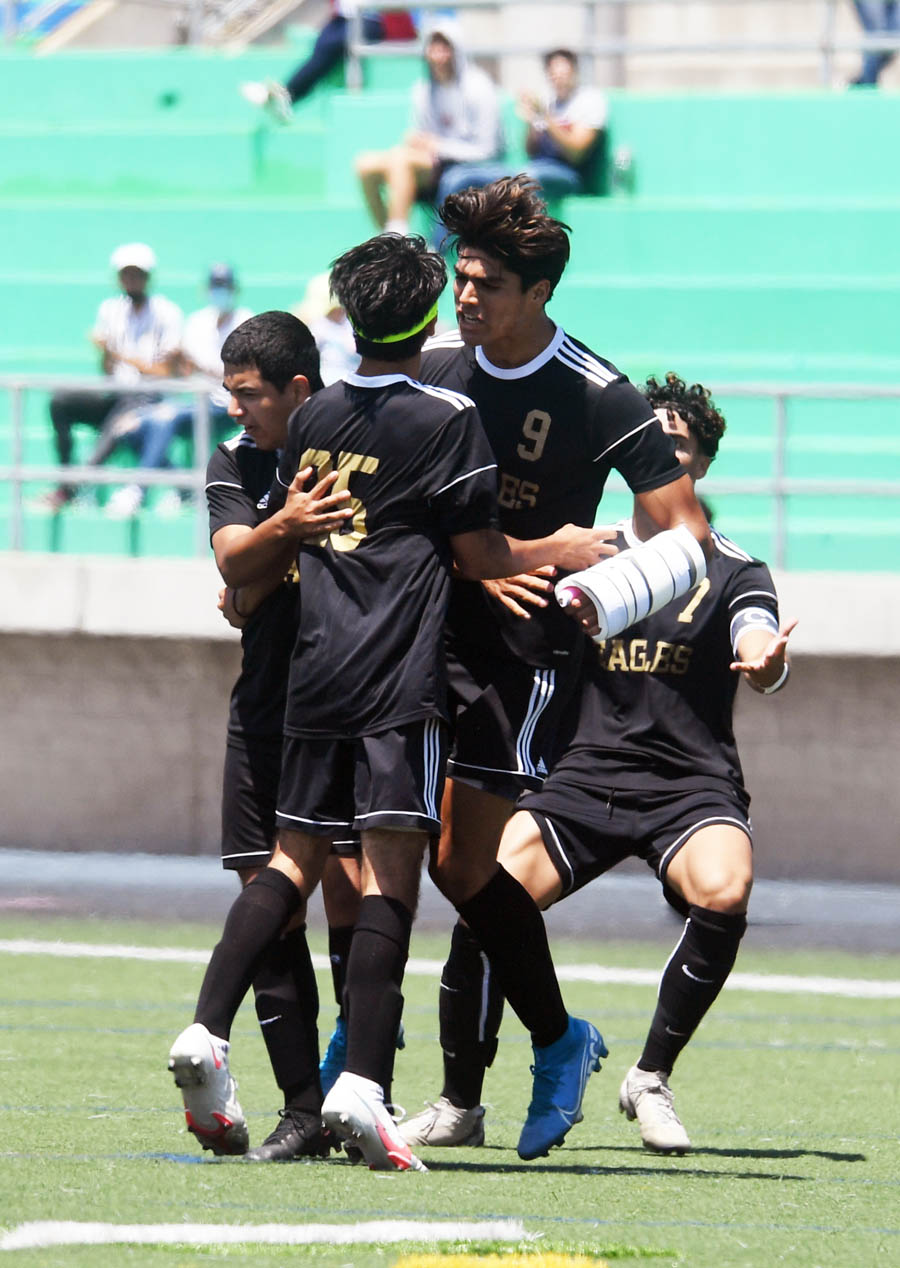 The Eagles did not allow a goal in their three matches to claim the Division IV title.

Robledo scored two goals in the win over Brawley.

Senior Cristian Munguia finished as the Eagles’ top scorer this season. He wasn’t hard to spot on the field while wearing a large foam protective cast on his left arm following a wrist injury he suffered in the semifinals.

Olympian controlled most of the action during the match, and there was little question the better team won.

Robledo managed to break through the Cougar defense with nine minutes left in the opening half. A defender quickly closed on him, however, as he approached the top of the 18-yard box. But Robledo managed to get off a shot before contact was made.

The ball bounded toward the net, then took a quirky hop past Shields, diving at the near post. The ball deflected across the goalmouth to the opposite side of the net before finally bulging twine.

Robledo said he thought the ball hit one of the raised letters in the football endzone before taking a fortuitous bounce for what proved to be the only goal of the match.

Alvarado wasn’t tested nearly as much as was Shields, who earned celebrity status in the team’s penalty kicks-from-the-mark (KFM) semifinal win over third-seeded San Ysidro.

With time ticking down in injury time, Shields took a free kick near midfield, booming an arcing shot from 60 yards out that floated over the fingertips of the opposing goalkeeper.

The equalizing goal came with just eight to 10 seconds remaining in regulation time.

While his cat-like reflexes were key for the boys of Steele in the final — he dove to block a penalty kick attempt by Robledo in the third minute of play — Shields was unable to duplicate any further magic against the high-flying Eagles.

“I was hoping for another goal but I’m happy with the one (we scored),” the Eagles coach said.

Olympian players massed in a celebratory group when the referee’s whistle finally sounded to end the match.

“Unbelievable,” Gonzalez said. “This journey was never certain, it was tough. We made it through. It was a great season.

“These boys we have here, I wouldn’t trade any of them. They worked so hard this season. They got everything they deserved. We’re all proud of them.”

Right defender Isaac Carbajal, one of 11 seniors on the team’s championship roster, felt his team played to its strength.

“It feels really good, we worked all season for this,” Carbajal said. “This wasn’t easy, but we were dedicated. We should have scored more goals, but our defense kept us in the game.”

Steele Canyon finished fourth in the Grossmont Hills League standings with a 2-5-3 record, placing ahead of Grossmont (1-6-3, fifth) and Granite Hills (0-6-4, sixth).

The Cougars (4-7-4) were seeded at the opposite end of the bracket from Olympian. Steele Canyon drew 10th-seeded High Tech High San Diego (2-1 upset winners over seventh-seeded Kearny, in the first round) in the its opening quarterfinal match. Following a 3-1 win over the Storm, the Cougars took on San Ysidro, also nicknamed the Cougars, in the semifinals.

However, the semifinal matchup between Cougar sides resulted in a 1-1 standoff through regulation play and a 15-minute sudden-victory overtime period.

Steele Canyon won the spot kick lottery 4-2 to advance to meet the Eagles.

It was the first championship game appearance for the Cougars, who had made it as far as the semifinals six years ago.

“We had a lot of adversity by playing in a league that was so highly competitive,” fourth-year coach Justin Johnson said. “From there, we trusted each other as a team. We were playing with confidence over the last couple months, and things started to come together once we started playing Division IV teams.” 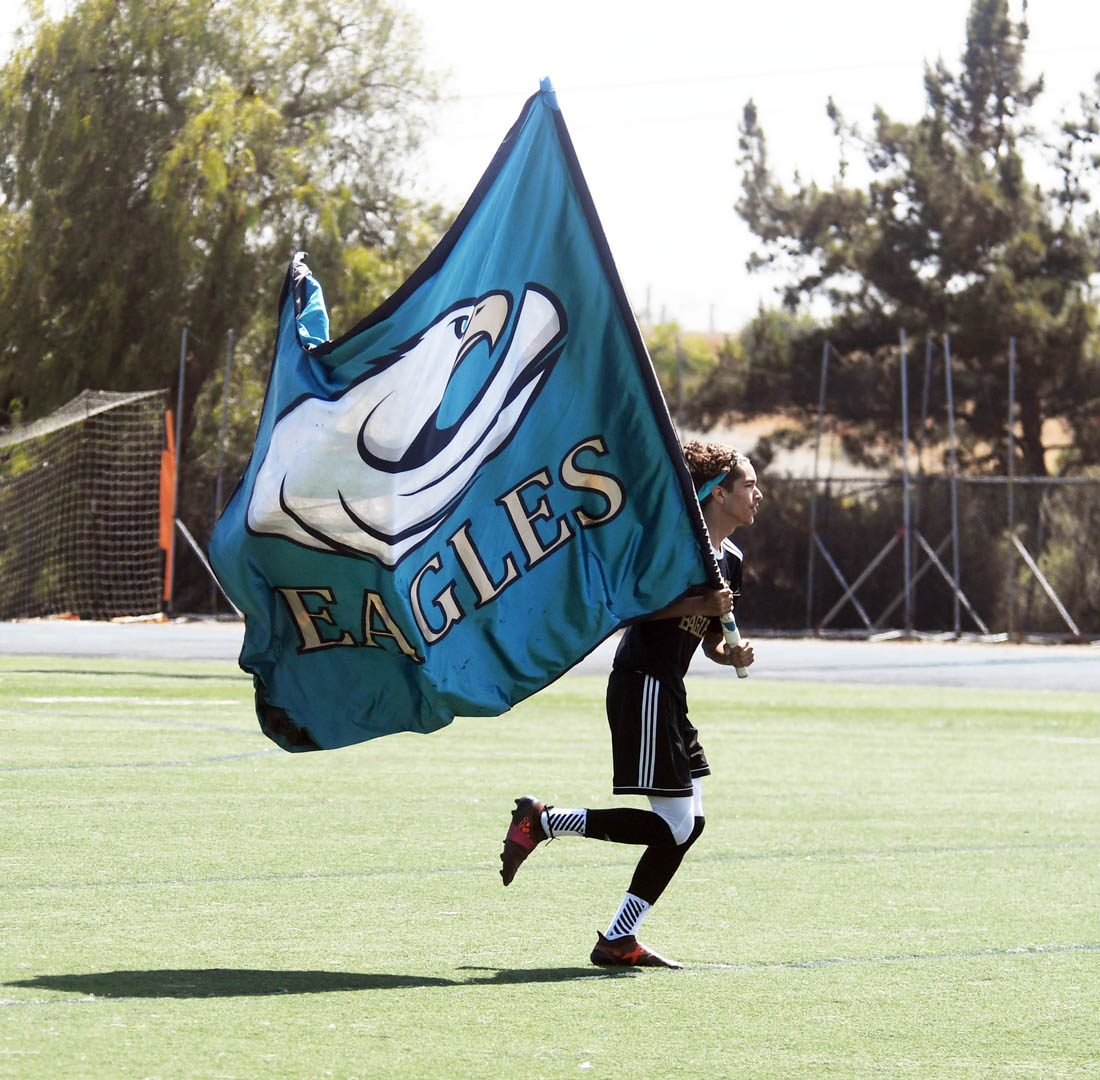 The division final was not the end of Olympian’s season. The Eagles qualified as the No. 3 seed for the Division V Southern California regional playoffs and won their opening two matches to advance to last Saturday’s regional championship game at top-seeded Crossroads Christian.

Olympian ended its season of achievement with a 2-1 loss to Crossroads Christian after defeating sixth-seeded Cornerstone Christian, 3-1, in the quarterfinals on June 1 and seventh-seeded Sierra Canyon, 2-0, in the semifinals on June 3.

The Eagles set a new standard in the program with 16 wins after finally concluding their history-making season with a 16-3-2 mark.

San Ysidro, which finished its season with an overall 8-5-2 record, had placed third in the Mesa League standings with 6-3-1 mark prior to the start of the playoffs.

It’s not too surprising since the South San Diego school has become known as a “soccer school.”

But in any given year the road to the section finals is a tough one, often involving a meandering, nerve-racking path due to the nature of overtime tiebreakers.

Because the teams were in different divisions, a double gender double-header was not possible to showcase both teams to their fans.

Unfortunately, the cards were not stacked in Southwest’s favor as the Raider ladies lost a 5-0 matchup against third-seeded Classical Academy and the boys team dropped a 5-3 penalty kicks-from-the-mark tiebreaker to second-seeded Rancho Bernardo following a 1-1 draw through regulation and overtime.

The Lady Raiders (10-6-1) split league contests with both San Ysidro and Montgomery while San Ysidro tied Montgomery and Sweetwater and lost once to Southwest.

The playoffs favored the Raiders, who shut out eighth-seeded Clairemont (11-4-1) by a score of 2-0 in the quarterfinals on May 21 and fourth-seeded Imperial (10-4-3) by the same score in the semifinals on May 25.

San Ysidro (11-3-2) received the No. 2 seed in the Division IV playoffs but was unable to advance in the bracket following a 1-0 overtime loss to 10th-seeded Hoover (10-11-1) in the quarterfinals.

Escondido-based Classical Academy, which finished 23-4 following a 1-0 loss to El Segundo in the Southern California regionals, presented an insurmountable challenge to Southwest’s championship hopes, however. The Pacific League champion Caiman ladies, who entered the final with a prodigious 117-20 goal-differential, built a 4-0 lead by halftime to erase a strong start by the reigning South Bay League champions.

Junior Hannah Lappe increased the lead to 4-0 by converting a cross in front of the net three minutes before halftime.

Junior Sophia DeLuca scored the lone goal in the second half for the Lady Caimans, that coming in the 48th minute. The Lady Raiders mounted offensive pressure late in the game but could not dent the Classical Academy net.

Southwest coach Angel Briseno remained proud of his team despite the lopsided outcome of the finals match.

“We were proud to be here and represent our school,” Briseno said after the game. “We never gave up, playing the full 80 minutes.

“It was a crazy season but we never stopped. I liked our spirit. The girls kept believing in each other. We represented our school to the best of our ability.

“I thank the seniors for being great role models; I thank our coaching staff for doing such a great job this season.”

Briseno hopes the returning players continue to set their sights high for the program.

“We were South Bay League champions — no one can take that away from us,” he said.

Raider Nation
Southwest, which finished runner-up in the Mesa League standings with a 7-2-3 league record, kicked off its playoff run with a 4-0 win over fifth-seeded Coronado (8-5) in the quarterfinals on May 22

The Raiders advanced to the championship game following a 2-0 victory against sixth-seeded Poway (5-9-4) in the semifinals on May 26.

Junior Ivan Gomez scored two goals in the win over Coronado while seniors Xavier Monge and Daniel Barragan both chipped in with one goal.

Monge paced the Raiders in scoring with 19 goals in 13 game appearances.

The Raiders (10-3-5) took a 1-0 lead in the 53rd minute on a penalty kick by Gomez but the Broncos netted the equalizer five minutes later on a goalmouth scramble that ended Southwest’s shutout streak in the playoffs.

The Raiders had two good scoring chances turned back before the game advanced to the PK shootout – a goal-line clearance by RB midfielder Samy Kanaan in the 66th minute and a punch save by Bronco goalkeeper Cade Miller early in the sudden-victory overtime period.