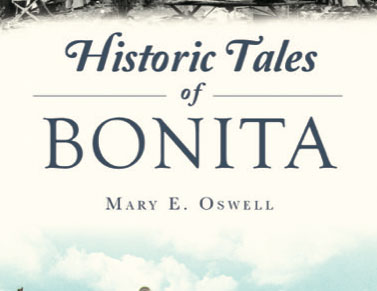 Chula Vista’s lemon history is well documented. The story of how Frank Kimball came to National City, or Rancho de La Nacion as it was known then, has been recorded .
But the history of Bonita is not as widely known.

The 144-page book started when Oswell worked at the Bonita Museum & Cultural Center when she was helping put together an exhibit. She found bits and pieces of Bonita’s history that could not fit into the exhibit so she said she started accumulating those pieces of history and wrote about it.

Each chapter highlights one section of history. The book’s opening chapter is called the Boston to Bonita connection. It’s about how a bunch of people who were from the greater Boston Area ended up being the movers and shakers that created the original little community of Bonita in the 1880s and 18890s.

There is a chapter about all of the different airplanes and balloons that either took off from Bonita or landed there. Another chapter is an account of Ella B. Allen, who the elementary school in Bonita is named after. Oswell said Allen was an important figure in Bonita’s history. Allen helped start the Women’s Club and was involved with different charities that took place in the Bonita-Sweetwater Valley area.

“The school was well-named after her,” Oswell said. “But I think her history was lost along the way and so people don’t know very much about her.”

Oswell currently resides in Colorado with her husband. But her roots are in Bonita. She grew up in Bonita and attended Allen Elementary School and Bonita Vista High School.
She said it was important to her to bring Bonita’s history to light.

“The history of Bonita is not really known because it never incorporated (into its own city) and because it would never have defined boundaries, people say they heard of Bonita but never knew where it was. “

Oswell said there’s evidence that European settlers settled in Bonita as far back as the 1860s. However, the name Bonita for the little community did not come about until the 1880s, she said.

Oswell said Bonita’s history is not well documented and sort of lost because since it’s an unincorporated city, it lacks the historical protection like some city’s do. She said there are not any historic home designations or anyone overseeing a historical society.

The Bonita Museum & Cultural Arts got started as part of Bonitafest in the 1980s. Prior to that time, she said unless you lived in Bonita and cared to find out about it there wasn’t a repository.

Oswell said another reason as to why Bonita’s history is not told is because there was a real shift in people that were leaving and coming into the Sweetwater Valley in the years after World War II. She said a lot of people either left Bonita or simply died in the 1940s and 1950s while a new wave of people came to live in Bonita because it remained rural.

“That new wave of people came (to Bonita) without any of the history for the first 50 years of the 20th century,” she said. “They loved Bonita but they didn’t know it.”

“Historic Tales of Bonita” is not Oswells’s only history book. In 2009, Oswell was part of a series called Images of America, which was more of a historic photo book.