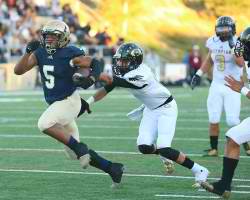 The 2015 football season will be remembered as one of giddiness and achievement at Mater Dei Catholic High School.
The same can be said for the 2016 pigskin campaign, though it had a much different ending.

Mater Dei Catholic will not be playing for a second consecutive season for a state title. But, hey, it was a fun ride … a very, very fun ride.

“We are very proud of the year we had and so proud of all our players and their accomplishments,” Crusader head coach John Joyner said. “Moving up two divisions in not only the San Diego Section but also state bowl games was a huge accomplishment and we are again very proud.”

The Crusaders scored on their opening possession but found themselves on the bottom end of a 27-3 halftime score after the Spirits scored on their opening four possessions in the game. In fact, the reigning San Diego Section Division II champions would have to endure a barrage of 34 unanswered points by Paraclete before ending the game — and the season — on a positive note with a pair of touchdowns in the fourth quarter.

The Crusaders — aided by a 55-yard completion from quarterback Chris Jones to receiver Eli Shelton — struck first in the contest on a 32-yard field goal by Andres Septien.

But the momentum quickly turned. A long kick-off return and 15-yard unsportsmanlike penalty set up Paraclete on the Mater Dei Catholic 37-yard line and, seven plays later, the Spirits went up 7-3 following a five-yard run by Kalanieta Latu
Latu would lead Paraclete with three touchdowns on the night.

The Spirits scored their next touchdown after completing a 69-yard field march, capped by a 12-yard scoring pass from Paraclete quarterback Tooni Ikahihifo to his brother Henry.

The score began to balloon from there.

Paraclete went ahead 21-3 on a one-yard plunge by Latu to complete a 95-yard scoring drive.

A strip-sack set the Spirits up in good field position on the Crusader 18-yard. Jamaal Bell scored one play later to hike the Paraclete lead to 28-3.

C.J. Verdell, Mater Dei Catholic’s touchdown-scoring machine, was stopped at the five-yard line on a fourth-down-and-one play just before halftime.

The Crusaders went for it on another fourth-down play, this time at the Paraclete five-yard line, but an incomplete pass turned the ball over on downs.

Joyner said his team’s inability to come away with points in the red zone played a big role in his team’s loss.

Verdell and Shelton gave Mater Dei Catholic fans something to cheer about when they each scored touchdowns in the waning minutes. It was time for the Crusaders to show some pride.

Jones hit Shelton on a 21-yard scoring pass to trim the team’s deficit on the scoreboard to 34-18.

Verdell scored on a three-yard run and Jones then hit Quentin Frazier on a two-point conversion pass to account for the game’s final points.

The touchdown was Verdell’s 40th of an otherwise amazing season while Shelton made his eighth TD grab.

Jones finished the game with 201 passing yards, completing 15 of 53 attempts. Verdell rushed for 104 yards on 22 carries while Shelton caught six aerials for 124 yards.

•Shelton finished the season with 895 receiving yards on 41 receptions.

•Kyle Moses and Shaun Jones led the team with five interceptions each.