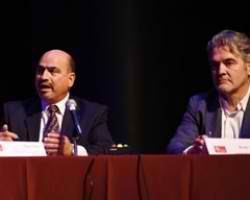 Chula Vista City Council candidates squared off at Southwestern College’s Mayan Hall Thursday night as they shared their visions for the city and their respective electoral district.

Candidates received questions regarding, among other topics, the revitalization of western Chula Vista, how to make the city more  business friendly and whether they would implement and fund a Tourism and Marketing District.

“We got to have a critical mass of people who both live and work (in western Chula Vista) and enough density and diversity in the downtown western end of the city in order to bring investment and improvements otherwise it’s going to remain the way it’s been for decades.”

Padilla’s opponent Jason Paguio, a registered Republican, said the completion of the bayfront is the way to revitalize Western Chula Vista as it would bring opportunities for economic development.

Paguio, the policy adviser to Councilman Steve Miesen, said he would consider bringing back a Tourism and Marketing District.

“I think it is a great opportunity to showcase your great assets like the Olympic Training Center, SeaWorld Aquatica, and the Otay Ranch Town Center and a lot of our youth sports,” he said. “So I believe it is in the best interest of our city to explore all potential options and opportunities to expand our tourism base in Chula Vista.”

Padilla said a Tourism and Marketing District said could succeed with the right financial mechanism in place.

District 4 candidates Rudy Ramirez and Mike Diaz discussed how they would make the proposed bayfront development become a reality, the impact of the cost recovery program on city revenues and addressing the homeless population in Chula Vista.

Diaz said he can make the Bayfront happen by working across party lines and building consensus.

“That project needs to be done,” Diaz said. “We’ve missed an opportunity years ago, Southwest Chula Vista needs the jobs. And so what I think makes me uniquely qualified is that I am able to reach across political lines and work together. We cannot allow this project to fail. That is not an option.”

“I see homelessness as a public health issue and not necessarily always a law enforcement issue and we need to begin to treat it that way,” Ramirez said.

Diaz said he would work on bringing temporary housing to the city to help homeless. He also said the County of San Diego has to help provide more resources and programs for the city to alleviate homelessness.

George Edwards, a new resident of District 3, said all the candidates did an excellent job in explaining how they would tackle certain issues.

“You can definitely tell who the former politicians are but the new guys held their own,” he said. “I already knew who I was voting for and this forum reaffirmed that.”

Edwards declined to say who has his vote but said the issues he cares more about are pension reform and cutting city spending.