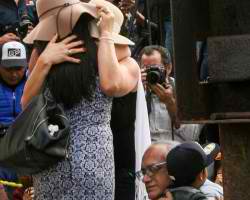 Laura Avila, 35, and her daughter Laura Vera Martinez, 11, waited nervously on the United States side of the border as Avila’s mother, Maria Socorro Martinez Lopez, stood inches away from them in Mexico. Rusted pillars and steel mesh divided them. They could hear one another, but not touch.

Avila had driven 140 miles from Los Angeles to San Ysidro. Her mother had flown 1,821 miles from Puebla, Mexico, to Playas de Tijuana for a slim chance to see her daughter and granddaughter. Only six families and two alternate families were selected by Border Angels, a humanitarian group, and the U.S. Border Patrol to have the opportunity to reunite with their loved ones that could not legally visit because of their Deferred Action for Childhood Arrivals (DACA) program/work permit. The program allows undocumented people to say in the U.S. but also prevents them from being able to leave.

Avila’s family was an alternate. There was no guarantee she was going to see her mother after more than 20 years of being separated, but she was hopeful.

Five minutes before the event started Enrique Morones, founder of Border Angels, told Avila  that a designated family did not show so Laura and her daughter would get to embrace Laura’s  mother for the first time in 20 years – for three minutes. It would also be the first time grand daughter and grandmother would meet in person.
Border Angels held the Opening the Door of Hope event at Friendship Circle in Border Field State Park on Nov. 19 in celebration of the United Nations’ International Children’s Day on Nov. 20.

Each of the six families present were guided one by one to the doorway. For 180 seconds, family members embraced, kissed and exchanged words of love.

Luis Eduardo Hernandez-Bautista was the first person to get to see his family. His girlfriend had submitted an application on his behalf as an early birthday gift. He was 5 years old when he first came to the United States.

Hernandez-Bautista said he hadn’t seen his father in more than five years. His brother also came along but did not get to meet with their father because of the six-person limit.

Tears streamed down Hernandez-Bautista’s face as he was escorted by Morones and Border Patrol agents to the opening in the fence where his father stood.

They embraced. They cried. They talked about how much they missed each other. As time ran out, the veins of his father’s hands strained as he pulled his son tighter into the embrace.

“It was very emotional and I felt a lot of joy,” Hernandez-Bautista said. “Honestly, I didn’t believe I was going to cry as much as I did. I just wish that it was more than three minutes.”

Hernandez-Bautista is part of President Barack Obama’s DACA program. Because he arrived in the U.S. as a child, he is able to work and study in the country temporarily. Hernandez-Bautista recently renewed his DACA application for the next two years and said he did not expect Donald Trump to win the presidency and is worried because his presidency will last at least four years.

“What Trump has proposed is so scary for a lot of minorities, myself included,” Hernandez-Bautista said. “He has said he plans to undo the law that protects me. He doesn’t even have to look for me. He has my address given that I’m in this program.”

His father was deported more than five years ago and Hernandez-Bautista said the only way his father could come see him is if he came illegally. Morones said the border wall causes migrants to come over to the U.S. illegally, which is dangerous. He said many risk their lives for family reunification.

“The wall doesn’t stop people,” Morones said. “It just forces people to cross in more dangerous areas. There’s the ocean, there’s tunnels, there’s ladders. So what we want to do is to prove that love is the answer, not hate.”
Avila’s mother was deported after entering illegally. She said the last time she saw her, her mother was 50 years old and now she will soon be turning 71.

“It was an early Christmas present for both of us and a birthday present for her,” she said.

Avila was able to bring only one of her three children, her 11-year-old daughter Laura, to visit her mother. Her daughter had only ever talked to her grandmother on the phone.

When their turn came the trio hugged under the doorway and did not let go of one another for the entire allotted three minutes. As time came to an end, Morones walked over to them to tell them their time was up. Avila and her daughter walked away from her mother with faces scrunched from crying.

“Three minutes for us after so many years, you forget those years,” Avila said. “For me and my mom, just to be able to touch her, hold her, I forgot it had been more than two decades.”