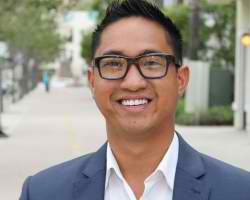 Jason Paguio is hoping the third time’s a charm.

The council aide for appointed Chula Vista Councilman Steve Miesen first sought political office in 2014. He did not make it out of the primary in the crowded field of seven candidates.

A year after losing out on that election, he sought an appointment on to the city council to fill the council seat vacated by Mary Casillas Salas, who won her bid for mayor.

Although Paguio, 30, became one of eight finalist for the open seat he lost out to Miesen.

Now Paguio is back at it again. His third time attempting to get on the city council as a candidate for Southeast Chula Vista, District 3.

“If I’m so lucky to be voted by the residents of District 3 in Chula Vista, I’ll wake up every single day working hard and finding solutions to improve neighborhoods and improve upon our quality of life,” he said.

Paguio, a small business owner, said his priorities for the district include protecting the quality of life for residents, making sure neighborhoods are safe and protect the district from irresponsible development that he said would harm or alter the community character of the district.

In a district where about one-third of its population is Asian-Pacific Islander, Paguio looks to be the first Filipino-American elected to the city council.

While his opponent, Steve Padilla said he has the experience to lead at City Hall,  Paguio rebuffs that notion and points to Padilla’s past controversies of hiring a bodyguard when he was mayor and taking out payday advances.

“I think ethics matter in this election,” he said. “I believe that the residents of Chula Vista want a council member they can be proud of. Regardless of having the right kind of experience, character counts. At the end of the day, character counts.”

He said District 3 needs a council member who is fiscally responsible with its budget and good stewards of taxpayer money.

Paguio said if elected, he can provide the city council with a different type of leadership.

“I think we have seen a lot o people come back and I think we can either look to the politics and policies of the past or we could turn the page to a new era of progress and prosperity,” he said.

Paguio originally stated in his ballot that he was an educator but after a challenge to the statement he removed that designation, listing himself only as a small businessowner.

However Paguio contends that he is an educator because he teaches around the world and is often times hired as a clinician. He said he chose not to fight the ballot designation to not create a distraction for his campaign.