The Titans finished third in the combined gender field after placing fourth in the boys half of the 20-team meet and fifth in the girls half.

The event, which featured more than 520 swimmers, was jam-packed with talent with nine meet records being broken, including four by Eastlake.

Lundgren also timed under the previous meet record in the individual medley with a 2:07.37 while finishing runner-up to University City’s Kathryn Hazle (who set a meet record in 2:05.10).

Lundgren and Hazle were named co-MVPs of the girls meet while Hughes shared the boys MVP honor with Christian senior Lucas Colombo, who helped set a meet record in the boys 200 freestyle relay while earning first-place finishes in the 200 freestyle (1:44.35) and 100 butterfly (51.24). 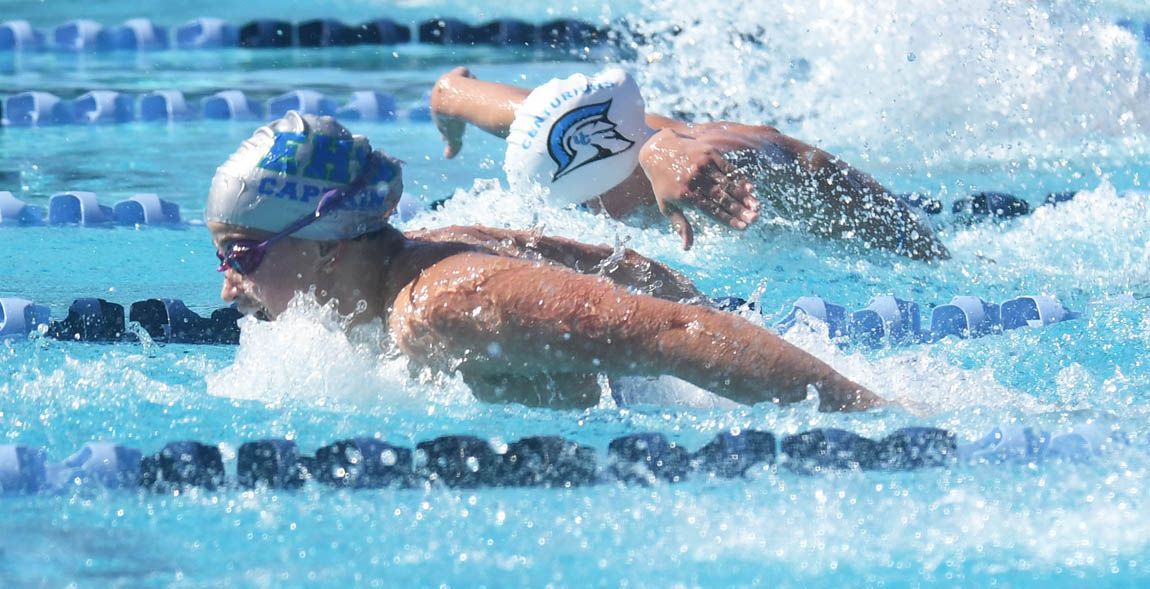 Lundgren, a state meet qualifier two years ago and the defending CIF Division I champion in the 200 individual medley and 100 breaststroke (in which she set a new section record), opened the meet in the 200 medley relay swimming the second leg. The team broke the old record by 0.48 second. Sophomore Victoria Naval swam the opening leg while senior Mirsha Lora swam the third leg and senior Aranza Martha swam the anchor leg.

Lundgren next competed in the IM where she and Hazle, swimming in adjacent lanes, went stroke for stroke for virtually the entire race separated by just 0.20 seconds. Hazle eventually touched first by 0.27 second.

Lundgren won by a two-second margin over Poway’s Ashlyn Hernandez in the 100 breaststroke, an event in which both swimmers eclipsed the previous record.

Incidentally, Hernandez also dipped under the old record in the 200 IM to join Hazle as a record-setting trio.

“I definitely want to get back to state,” said Lundgren, who placed ninth as the consolation finals winner in the 200 IM in her 2019 trip to the state meet. “I want to make the finals (top eight heat) and get a medal.”

Besides winning the 500 freestyle by two seconds (over Del Norte freshman Julien Rousseau) and dipping four seconds under the old record, Hughes also recorded a runner-up finish in the 200 freestyle (1:44.49) to Colombo by a scant 0.14 second.

“I haven’t really swum high school since my freshman year,” Hughes said. “I’m coming into this year with the idea that I’m trying to set as many records as I can.”

Lundgren and Hughes weren’t the only Eastlake swimmers to snatch individual gold at the meet. Martha recorded the top time in the girls 50 freestyle (25.00) and came back to place third in the 100 freestyle (55.41).

“Seeing what she did today gives us hope for the rest of the season,” EHS coach Steve Wiggs said. “She has some personal goals she wants to accomplish. She wants to go under 24 seconds in the 50 and 52 in the 100.”

Eastlake swimmers posted a number of top 10 finishes in their respective events.

The Titans are undefeated in their opening four Mesa League dual meets against Hilltop, Bonita Vista, Mar Vista and Olympian.

“It’s always a team goal to place top three in CIF,” Wiggs noted. “It’s also a team goal to be able to take a team to state. We’ do have a couple of swimmers who will make it, but we have some relays that also could go to state. We could bring a small team there.”

Castillo bettered Naval’s time by two seconds to post the win in the 200 freestyle. The Lady Baron finished 16 seconds off Hazle’s winning time in the 500 freestyle and five seconds behind runner-up Revere Schmidt, a junior from Santa Fe Christian.

“I’ve been traveling with Team Mexico, so it was good to be able to drop in and win an event,” Castillo said.

Olympian finished 13th in the combined team standings with 103 points — 11th among girls teams with 73 points and 13th among boys teams with 30 points.

Canyon Crest Academy had the highest combined score of 724.5 points, followed by Del Norte with 521.5 points and Eastlake with 453.3 points.

The competition was fierce from start to finish on the day.

“A lot of meet records were set,” Granite Hills coach Cathy Elgas said. “There were a lot of kids here who will be CIF champions.”