The Mater Dei Catholic High School football team returned to gridiron action last Friday after two weeks off because of COVID-19 protocols. The Crusaders seemed to pick up right where they left off by trouncing the visiting La Jolla Vikings 56-18.

The Crusaders enter this week ranked sixth among San Diego Section teams, first in Division III, and certainly do not look to dip down in the rankings any time soon based on their performance to kick off the 2021 fall season.

If anything, head coach John Joyner’s team will be looking to climb higher in the rankings.

“It felt really great to be back out after two weeks off and the guys were really excited to play a game and play against a great program like La Jolla,” Joyner said. “I think our guys were a little too excited early in the game. but we calmed down and I thought we played a very good team game all around.” 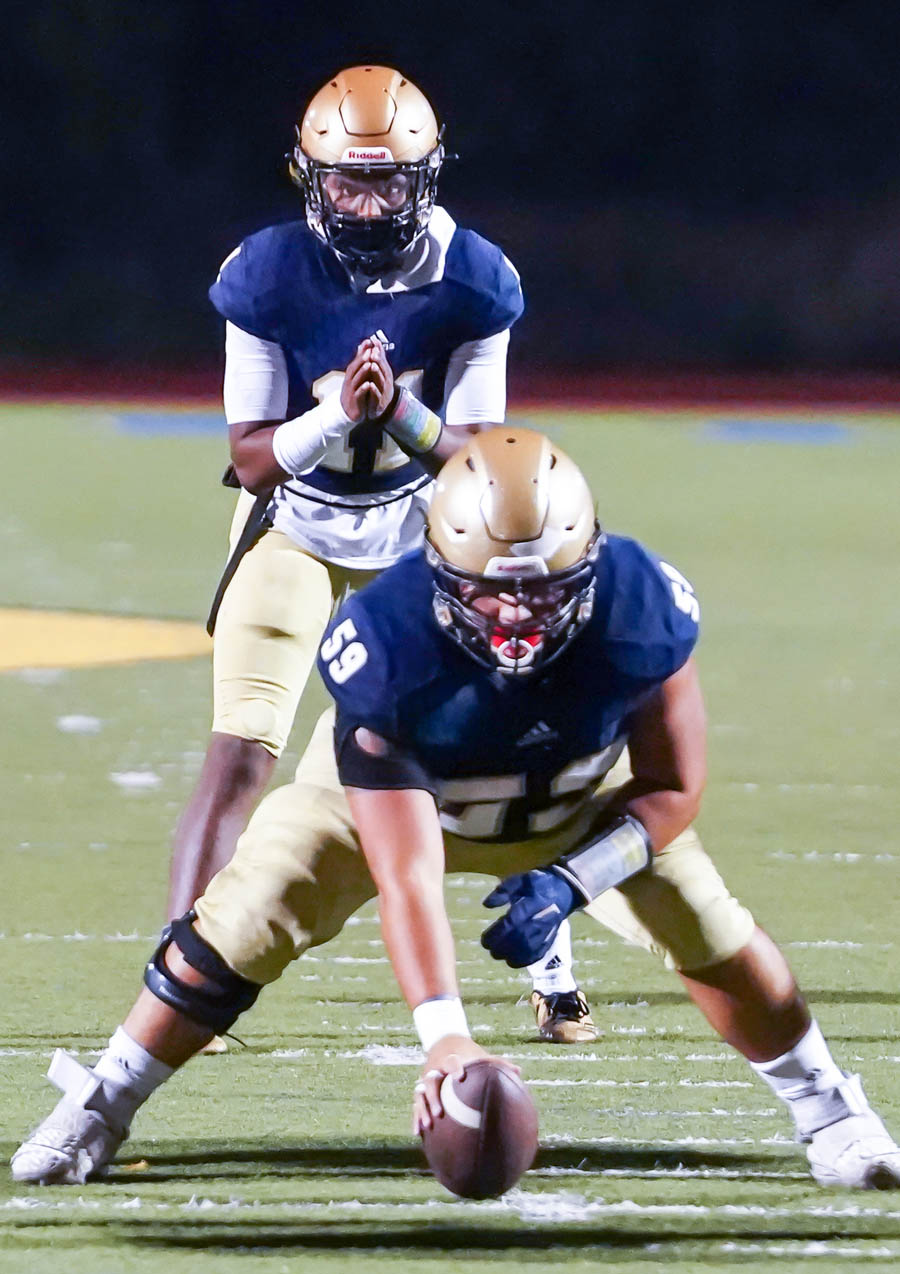 Neither signal-caller was intercepted in the non-league contest.

Listed as a wide receiver, George regularly practices at quarterback just in case his services are needed in a game. They were last Friday.

There wasn’t much of a drop-off when he entered the game.

“Rollin George did a great job stepping in for Dominic,” Joyner said. “He was prepared and very composed. I thought he did a terrific job spreading the ball around and using his legs to keep the chains moving. We have full faith in Rollin whether he is at wide receiver or at quarterback.”

Sophomore Anthony McMillian led the hosts on the ground with eight carries for 85 yards, scoring two touchdowns, while junior Nico Mosley rushed 10 times for 81 yards with one touchdown. George gained 14 yards on four carries, scoring once, while junior Jaylen Hall had one carry for a five-yard touchdown. 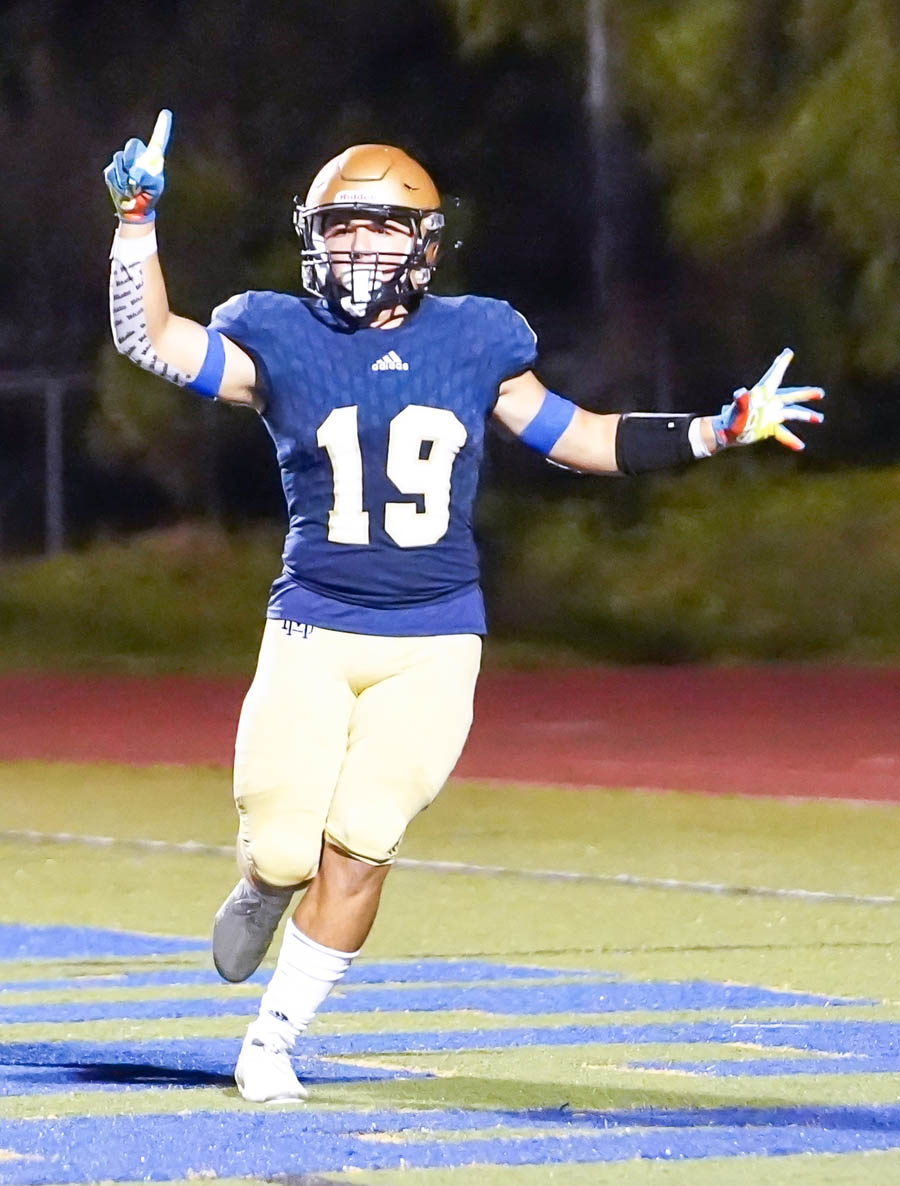 Edwards had one sack along with senior Jason Harden while junior Anthony Lopez had one interception.

“Our defense is turning out to be very special,” Joyner said. “We have great team speed but really our defensive line, led by Jason Harden, Luke Teskey, Joey Hiner and Taylor Lepisi, have been dominant. Tre played his best game so far this year; he was fast and physical and did a great job of getting us lined up. He was a menace all over the field like usual.”

The Crusaders host No. 16th-ranked St. Augustine (1-4) in this Friday’s homecoming clash. The Saints’ record is misleading in that they have played some of the top teams in the region to kick off the season.

“Saints is a very big football team,” Joyner said. “We have to match them physically. We have not faced an offensive and defensive line this big and they are well coached and very disciplined. It should be a fun and exciting matchup.”

The Chula Vista Spartans have obviously been forced to play catch-up after missing the opening two weeks of the season because of COVID-19 protocols.

The team’s opening game of the season wasn’t particularly pretty – a 24-0 non-league loss at Hilltop in the teams’ annual Kiwanis Bowl rivalry matchup. The Spartans’ second trip to the gridiron showed more promise, though it ended with a 28-13 non-league loss to visiting Canyon Hills.

Last Friday’s South Bay League opener against visiting Mar Vista proved to finally be the charm as Chula Vista posted a 30-20 victory to record its first win of the 2021 fall season.

The timing of the clutch victory was just what the football doctor ordered.

“It was a great game,” Spartan head coach Howard Bannister III said. “We had the legendary Gary Chapman speak to the team prior to the game and alumnus Thomas Tutogi fire them up at halftime.”

The result was definitely a night to remember for the hosts.

“It was a total team effort against a very talented Mar Vista team,” Bannister said. “We rushed for 188 yards with senior Anthony Venegas and junior Giovanni Barrios getting the bulk of the carries and each with a touchdown. Junior quarterback Jacob Pedroza hooked up with sophomore wideout Jacob Davidson twice for touchdowns as well.

“The defense played great. Junior defensive end Mathew Robertson had two sacks on the night and senior linebacker Raymond Cruz led the team with eight tackles and was crowned homecoming king at halftime.”

The loss was the third consecutive for Mar Vista (2-3) after opening the season in grand style with a pair of lopsided victories.

Standout Jordan Mahan scored on touchdown receptions of 61 and 50 yards in a 49-18 non-league loss to Coronado on Sept. 10.

Bannister is hoping his team can carry the momentum of last Friday’s victory into this Friday’s game at San Ysidro, which defeated host Castle Park, 49-6, in its league opener last Friday.

Both the Spartans and Cougars are 1-0 in league play. San Ysidro is 3-1 overall while Chula Vista is 1-2.

“San Ysidro is 3-1 and will provide a very good challenge,” Bannister said. “But we feel as though we grew as a team this week and look forward to seeing the impact that has on our performance this week.”

Chula Vista and San Ysidro will rematch Oct. 8 in a non-league contest to make up games lost by both teams to COVID-19 protocols.

The Cougars scored seven touchdowns in the win over Castle Park, including two rushing by Jackson and another on a fumble return. Jaime, junior quarterback Ja’Marcus Jiles (62 passing yards, 32 rushing yards) and senior Johan Gutierrez all scored one rushing touchdown.

On defense, Jaime had two interceptions while Jackson had one sack. Senior Santiago Luna also recovered a fumble. Senior Sal Samano keyed the visitors with 15 tackles, including 10 solo stops.

“Our ‘MJ’s’ really showed up for the second consecutive week on both sides of the ball,” San Ysidro head coach Keith Aguon said. “The defense turned in another standout game led by seniors Matthew Jaime with two interceptions and one for a touchdown and McKai Jackson with a sack, forced fumble, fumble recovery and a touchdown.

“Both seniors also contributed to the offensive scoring with a touchdown run for Jaime and two touchdown runs for Jackson, including a 48 yarder. Senior Johan Gutierrez also had a 67-yard TD run and junior QB Ja’Marcus Jiles with an 18-yard TD keeper.”

Montgomery and Castle Park high schools will renew their football rivalry this Friday in the teams’ annual Warrior Bowl. Kick-off is 6:30 p.m. at Montgomery High School.

The series resumes after Montgomery’s 40-0 shutout victory at Castle Park during the 2021 spring season. The Aztecs defeated the Trojans, 34-10, in 2019 for the South Bay League banner, though Castle Park later advanced to the Division V CIF championship game.

The Aztecs piled up the yardage but not the points in last Friday’s 34-14 non-league loss at Mission Bay.

Montgomery (2-2) amassed 320 all-purpose yards in the game while the host Bucs tallied 372 all-purpose yards. The big difference came in the turnover department as Mission Bay recorded one interception and two fumble recoveries.

Junior Ryan Vasquez completed 11 of 22 passing attempts for 110 yards with one touchdown and one interception while junior Victor Flores had 13 carries for 63 yards.

Senior Juan Estrada rushed six times for 27 yards and one touchdown. He also made 10 tackles to lead the team in that department.

Junior Jordan Benton (135 all-purpose yards) had three catches for 53 yards and one touchdown. He also racked up 82 return yards on two kickoffs, including one measuring 62 yards.

The Aztec defense recorded four sacks, including two by sophomore Mike Mohr and one each by sophomore Arath Leyva and Flores.

The Trojans have been outscored 219-38 but that doesn’t mean the team isn’t lacking its share of standouts.

Senior running back Davien Simler rushed for 127 yards and scored both Trojan touchdowns in a 33-13 non-league loss at Vincent Memorial on Sept.10.

But records may not be necessarily important where intense rivalry games are concerned.

Aztec attack
On the season …

Southwestern College: The Jaguars have kicked off the 2021 season with a 1-2 record following a last-minute clutch 10-7 victory against Grossmont College on Sept. 4 and consecutive home field losses to No. 7-ranked College of the Canyons (52-10 on Sept. 11) and Palomar College (26-7 last Saturday). Albert Robinson (seven carries, 16 yards) scored the Jags’ lone touchdown in last Saturday’s game. SWC plays at Cerritos (1-2) this Saturday.