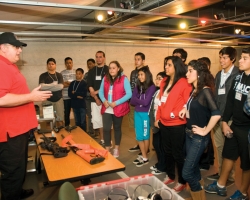 Teenagers participating in a police academy hosted by the Chula Vista Police Department recently learned about firearms and how to defend themselves.

The 10-week course is free and gives teenagers between the ages of 13 and 18 an opportunity to see law enforcement through an officer’s perspective.

Walker discussed the importance of the appropriate use of force in different scenarios.

“As officers, we’re allowed to use force when we feel that our lives or safety is in danger,” Walker said.

Faddis showed students what’s referred to as the field interview stance, a defensive position created by slightly squatting and raising the hands to block the face and body.

Faddis emphasized the importance of control when teaching defense tactics, while Walker explained to the students how the human body responds to threats.

“It takes 1.5 seconds to receive, process and respond to a threat,” Walker said.

Walker demonstrated a technique called “the spear,” which uses the side of the arm to strike someone across the chest, in an attempt to disable a combatant.

“Body mechanics is crucial with this technique,” he said.

“When we take out our baton, we have to be able to articulate why it was useful,” she said.

Lopez-Eng also explained that when an officer is attacked he or she should respond with a step higher in level of force to get compliance from the assailant.

Officers explained that striking with the baton is used to cause motor nerve dysfunction and is focused on three primary areas of the body, depending on an attacker’s persistence.

Officers initially strike behind the calf; however, if a person does not comply, an officer will strike at the joints and finally the head, if the officer feels life is being threatened.

“We don’t want to cause permanent injury,” Lopez-Eng said. “That’s not our goal.”

Officers also emphasized the importance of communicating how they want the person to comply.

“If you don’t give commands, it’s going to be considered an excessive force situation,” Lopez-Eng said.

Officers suggested commands such as “get back” and “get down.”

“The purpose is to put all that energy into that target,” Walker said.

Walker has taught martial arts for 15 years and said he’s enjoyed volunteering for the academy.

“I’ve been teaching for a long time,” Walker said. “I just enjoy seeing that spark in people. If we can present training that’s safe and relevant, it’s a rewarding thing.”

Lopez-Eng said she wanted to be a police officer to make a positive influence and that defensive tactics are important for officer safety.

“For officers I think it’s the best way to stay on top of your game,” she said. “It’s survival tactics. These are skills that are necessary for us to go home at the end of the day.”

Faddis said the academy provides teenagers the opportunity to get to know them better.

“Overall I think it’s an understanding of what law enforcement really is,” Faddis said. “It really helps them get a first-hand look at what we do.”

Sgt. John Stires, a  Chula Vista police officer and firearms instructor, showed students why and how officers handle and shoot handguns and rifles.

First he demonstrated a beanbag gunshot.

“This is all about pain compliance,” he said, adding when officers use these they try to shoot for a larger target area, such as the thigh or abdomen.

“It’s a major hit and very accurate,” he said.

Stires said he trains officers to a high level of speed and accuracy when shooting.

“Our standard here is 100 percent hits,” he said. “Every hit counts. No misses are allowed. Almost always we are reacting to something else. The other person has the first move.”

Otay Ranch High School student Ryan Culver wants to be a police officer for the Chula Vista Police Department and said he enrolled in the academy for experience.

Culver, 17, is also the captain of the Chula Vista Police Explorers program for the police department.

“I wanted to expand my knowledge of law enforcement as a whole, plus the more certifications I can have and the more I receive, the better it looks for me when I actually do apply,” Culver said.

Culver is also a member of his school’s mock trial team, which focuses on teaching court procedure and the law, and he is the captain of the school’s academy of criminology and justice program.

Culver said the class was fun.

“I’m always interested in attending defensive tactics classes,” he said. “I have done martial arts for the last 12 years. I like to see people’s different approaches and different techniques that they like to apply.”