The Crusaders out-scored the Bulldogs, 27-7, in the second half to record the decisive victory.

With the win — the third CIF championship for Mater Dei Catholic head coach John Joyner and the eighth overall for the Crusaders in their history — the reigning Mesa League champions (11-0) qualified for this Friday’s Southern California regional Division 2-AA playoff game against Division I section champion Helix Charter.

The top-seeded Highlanders (9-3) defeated the third-seeded Lincoln Hornets, 28-21, on the strength of two touchdowns in the final quarter to erase a 21-14 halftime deficit.

The Helix-Mater Dei Catholic matchup will be a first this year and certainly a first in the regional state playoffs.

“We’re the kind of team with a big play always in the making,” said Joyner, who previously won CIF titles in 2015 (Division IV) and 2016 (Division II). “We make a big play week to week. We knew we were going to do it this week.”

They did — multiple times.

Mater Dei Catholic never trailed in the game, though it was close in the early stages.

Following a Ramona punt, Crusader sophomore running back Anthony McMillian broke three tackles to move the ball to the Bulldogs 24-yard line. Another McMillian run advanced the ball to the Ramona 10-yard line before the drive stalled and sophomore Ricky Osuna kicked a 21-yard field goal to put Mater Dei Catholic ahead 10-0 with 25 seconds left in the first quarter.

The Bulldogs, in turn, moved the ball to the Crusader 12-yard line before settling for a 29-yard field goal to narrow the score to 10-3 with 5:45 remaining in the first half.

The teams traded punts over the balance of the half as the game settled into a defensive chess game.

The second half featured explosive play, in particular by Mater Dei Catholic.

A 40-yard interception return by junior defensive back Anthony Lopez set up teammate Nico Mosley’s three-yard touchdown run in the early moments of the third quarter to give the reigning Mesa League champions some breathing room with a 17-3 lead.

Ramona (9-4) scored its lone touchdown in the game on an ensuing counter-offensive capped by an eight-yard touchdown pass from senior quarterback Devin Sobczak to senior Gabriel Lutz.

At 17-10, the Valley League champion Bulldogs were very much back in the game.

But the Crusaders came up with an answer — another big play. Nankil passed 51 yards to McClure for a 23-10 lead.

The back-breaker came on Mater Dei Catholic’s next possession as Nankil flipped a pass to junior Rollin George in the flat. George then completed a halfback pass down field to a wide open Surahz Buncom, who raced untouched into the end zone for the final 48 yards.

George had the arm and accuracy as the team’s reserve quarterback.

“That was the back-breaker because they weren’t expecting it,” Nankil said.

Now in desperation mode, Ramona punted from its own end zone with 4:55 to play in the game. Mater Dei Catholic took over at the Bulldogs 28-yard line. Junior Jaylen Hall promptly ripped off a run to the Ramona six-yard line.

Mosley, a junior running back, completed the 14-second drive with a touchdown run.

The Mater Dei Catholic defense forced a turnover on downs at the 15-yard line and later punted to end the game.

The defense made numerous stops throughout the contest either by turnover on downs, tackles for losses or quarterback sacks.

“We came out to do our thing,” senior lineman Joey Hiner said. “Me and my boys came out and set the line of scrimmage. We went to play in (Ramona’s) backfield.

“Our offense came out slow to start the game, so we had to bail them out.”

“Winning the CIF championship meant a lot to us because we hadn’t been back here since 2016,” Nankil said. “It’s always exciting to win for the school.

“Watching the defense work so hard brought the offense closer together.” 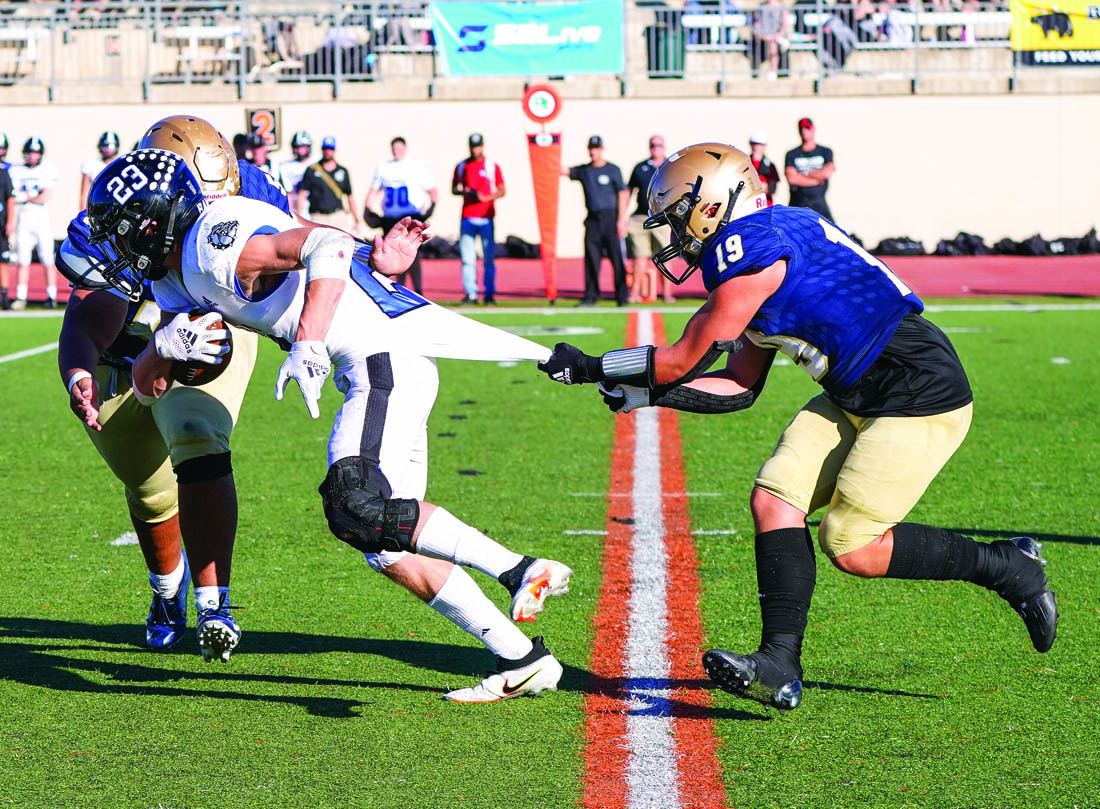 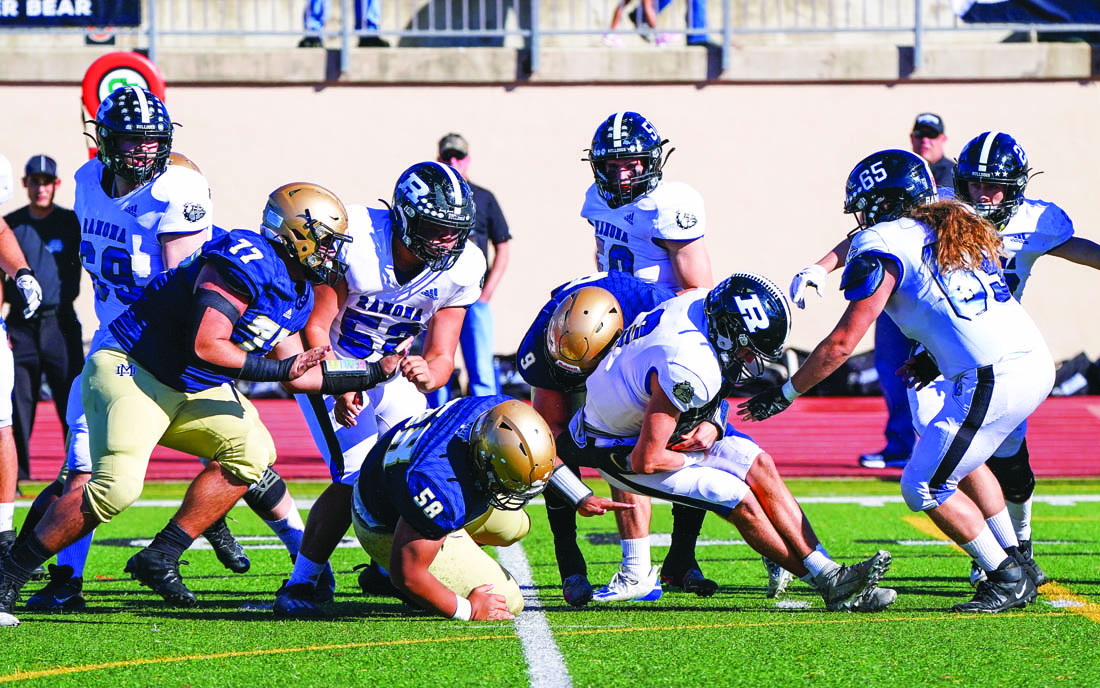 The state title game is scheduled Dec. 10 at 4 p.m. at Saddleback College.

The Highlanders posted a second-half defensive shutout and used a pair of clutch touchdowns in the final six minutes of regulation play to come full circle against the Hornets (8-4). The Scotties scored the game-winning touchdown with just 1:13 to play in regulation to highlight the dramatic turnaround victory.

The Highlanders led once in the game, 7-6, late in the first quarter after Washington scored from three yards out. The Scotties later tied the game, 14-14, on a six-yard run by Washington.

The Hornets (8-4) scored with 10 seconds to play in the first half to take a one touchdown lead. But the Highlanders turned the game around in their favor in the latter stages of the final quarter.

Junior Adren Parker returned a punt 39 yards to the Lincoln 16-yard line. The Scotties stayed with their money man as Washington carried the ball six times, eventually punching in the ball from a yard out with 6:03 to play.

A fumble recovery by Helix sophomore Kairo Kahananui at the 27-yard line set up Washington’s one-yard sweep to the right in the dying seconds for the game-winner.

Green machine
Top-seeded Helix Charter Highlanders rallied from a 21-14 halftime deficit on the strength of a second-half defensive shutout and a pair of clutch touchdowns in the final six minutes of last Saturday’s Division I championship game to down the third-seeded Lincoln Hornets, 28-21, in front of a standing room-only crowd of 5,000 fans at Escondido High School.

The Scotties scored the game-winning touchdown with just 1:13 to play in regulation to highlight the dramatic turnaround victory.

Owens believes his team’s tough early season schedule has set the team up for postseason success. 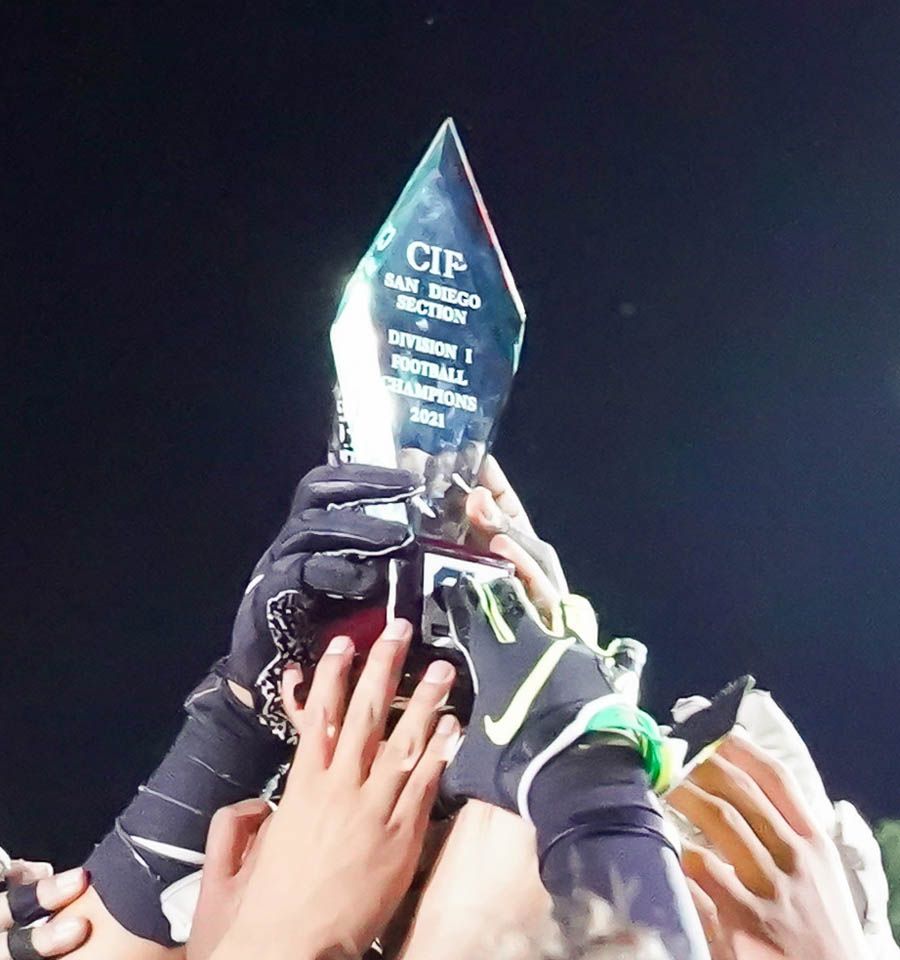 “We played Servite, which was ranked second in the nation, we played Mission Viejo (ranked eighth in the state) and we played Cathedral Catholic (San Diego Section Open Division champions),” Owens said. “We’ve definitely been through a challenging schedule throughout the season that has made us the team we are today.”

The Highlanders have appeared in seven consecutive section championship games, winning four. Helix has appeared in 23 CIF finals overall; the CIF finals appearance was the fifth for Owens personally.

History has a way of repeating itself.

“The offense showed up when we needed it to,” Owens said. “We played well in all three phases. We knew the defense had to make a stop. Then we got the turnovers. I’m really proud of our defense.”

The first half was about Lincoln, the Highlanders and the officials.

Some controversial calls helped extend Lincoln’s final scoring drive in the half to enable the Hornets (8-4) to take a touchdown lead.

Lincoln nursed its one touchdown lead until the fourth quarter. 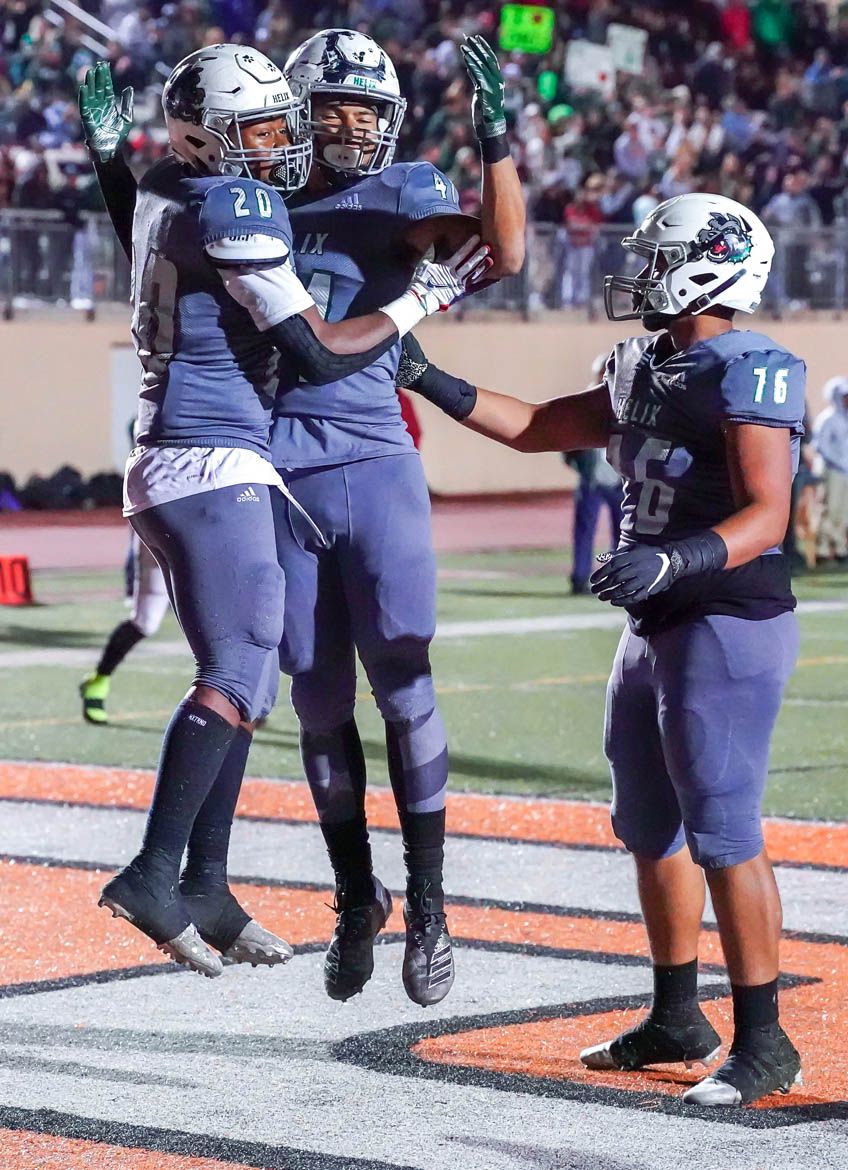 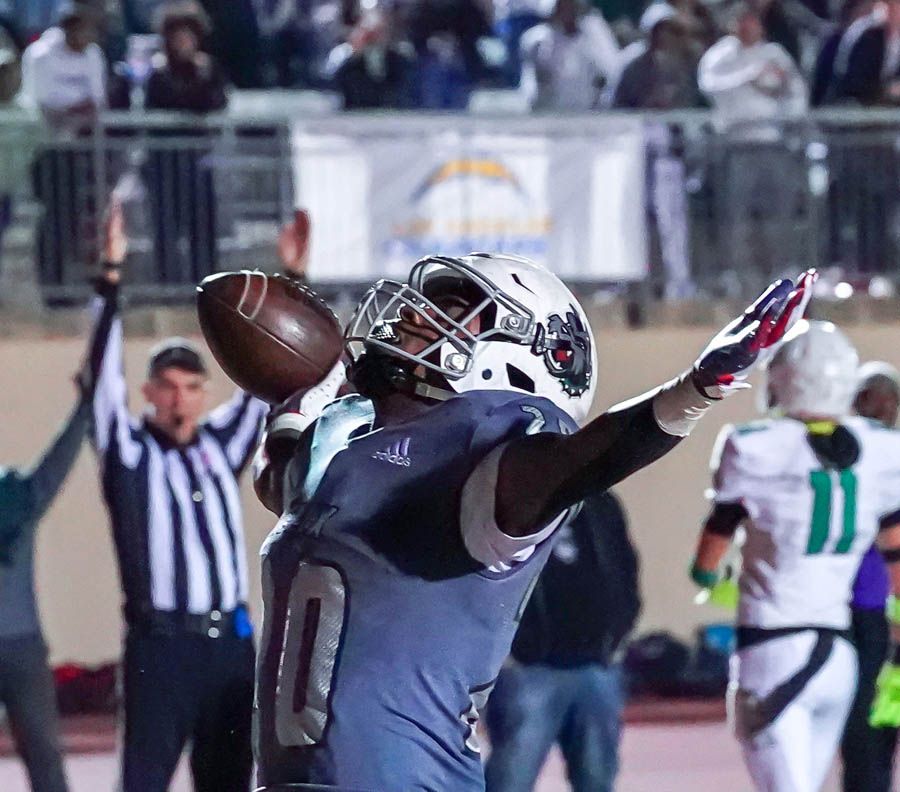 The Hornets took a 6-0 lead on a 14-yard touchdown run by junior Roderick Robinson with 6:44 left in the first quarter. The Highlanders blocked the extra-point attempt.

The Helix defense stamped its name on the game when senior James Johnson Jr. intercepted a pass and returned the ball to the Lincoln 14-yard line. 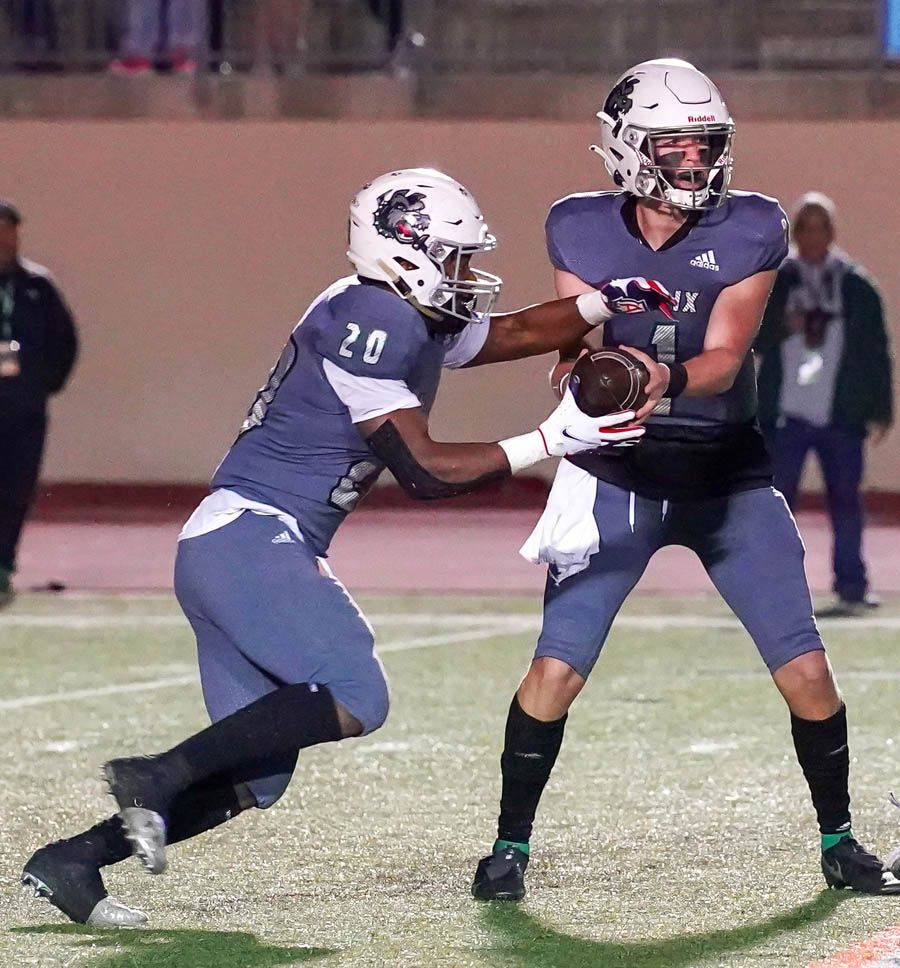 Senior Christian Washington scored the first of his four touchdowns in the game on a three-yard run to cap the series. With senior Noah Horvath’s successful extra-point conversion, Helix took a 7-6 lead.

That would be the Highlander’s only lead until the waning seconds of the game.

Lincoln missed a 30-yard field goal attempt with 1:15 remaining in the first quarter and the Scotties blocked a 49-yard attempt (with a return for an apparent touchdown by junior Ezriel “Puka” Noa nullified by a penalty) midway through the second quarter.

The Hornets eventually took a 14-7 lead with 5:40 to play in the first half as senior quarterback Jalen Daniels hit Oregon-bound senior Jalil Tucker on a 43-yard touchdown bomb. Robinson ran in the two-point conversion to tack on eight points on the scoreboard.

Washington scored his second touchdown of the game on a six-yard run with 2:42 to play in the half as the teams traded touchdowns.

The score stood 14-14 before Lincoln senior Jahill Florence made a 20-yard touchdown catch with 10 seconds to play. The Hornets’ scoring drive was aided by a 15-yard penalty when it appeared the Helix defense had stopped the Lincoln field march.

The Hornets would not enter the end zone again for the remainder of the contest.

The Highlanders turned the game around in their favor in the latter stages of the final quarter.

Moments after Helix had missed a 26-yard field goal attempt, junior Adren Parker returned a punt 39 yards to the Lincoln 16-yard line. The Scotties stayed with their money man as Washington carried the ball six times, eventually punching in the pigskin from a yard out with 6:03 to play. Horvath’s PAT tied the game 21-all.

A fumble recovery by Helix sophomore Kairo Kahananui at the 27-yard line set up Washington’s one-yard sweep to the right in the dying seconds for the game-winner.

An interception by Noa on fourth-and-five with 20 seconds to play sealed the Hornets’ fate.

Noa continued a family tradition at Helix. Older brothers Ezekiel and Elelyon have gone on to play at Boise State and Utah State, respectively.

Washington dominated the Helix offense with 45 carries for 181 yards. He enters Friday’s regional playoff game with more than 2,000 rushing yards and 31 total touchdowns to his credit this season.

“Our goal was just getting that last touchdown and being physical when they weren’t,” said Washington, who has scored 10 touchdowns in three playoff games this season. “We wanted to really dominate. It was a do-or-die situation we were in.”

Owens said a key to the victory was learning how to stop Robinson (23 carries, 153 yards) on the ground. His team continued to grow even during the game.

“We play a lot of young guys,” Owens said. “We matured over the season. We’ve gotten better and better. In a CIF championship game, you’ve got to play your best football to win.

“We’re a second-half team. We made some adjustments at halftime. You always want to put your kids in the best situation to succeed. I’m so proud of the whole coaching staff.”

SDSU ended regular season play with a 27-16 victory against Boise State last Friday in Carson to wrap up the MW’s West Division championship. The Aztecs rallied from an early 16-3 deficit to post the comeback victory with four unanswered scoring drives.

Matthews (nine catches, 133 yards) caught a 29-yard touchdown pass from Jordon Brookshire to get the SDSU steam-roller going. Bell (15 carries, 42 net yards) scored on a two-yard run to put the Aztecs ahead, 20-16, in the third quarter.

The Highlanders program will be showcased in back-to-back games against the Aztecs. Ezekiel Noa (28 tackles, three sacks) plays for Boise State while Elelyon Noa plays for Utah State.

The Aggies enter the game with a 9-3 record as the Mountain Division champion. Elelyon Noa has 156 carries on the season for 546 yards (4.4 rushing average) with four touchdowns. 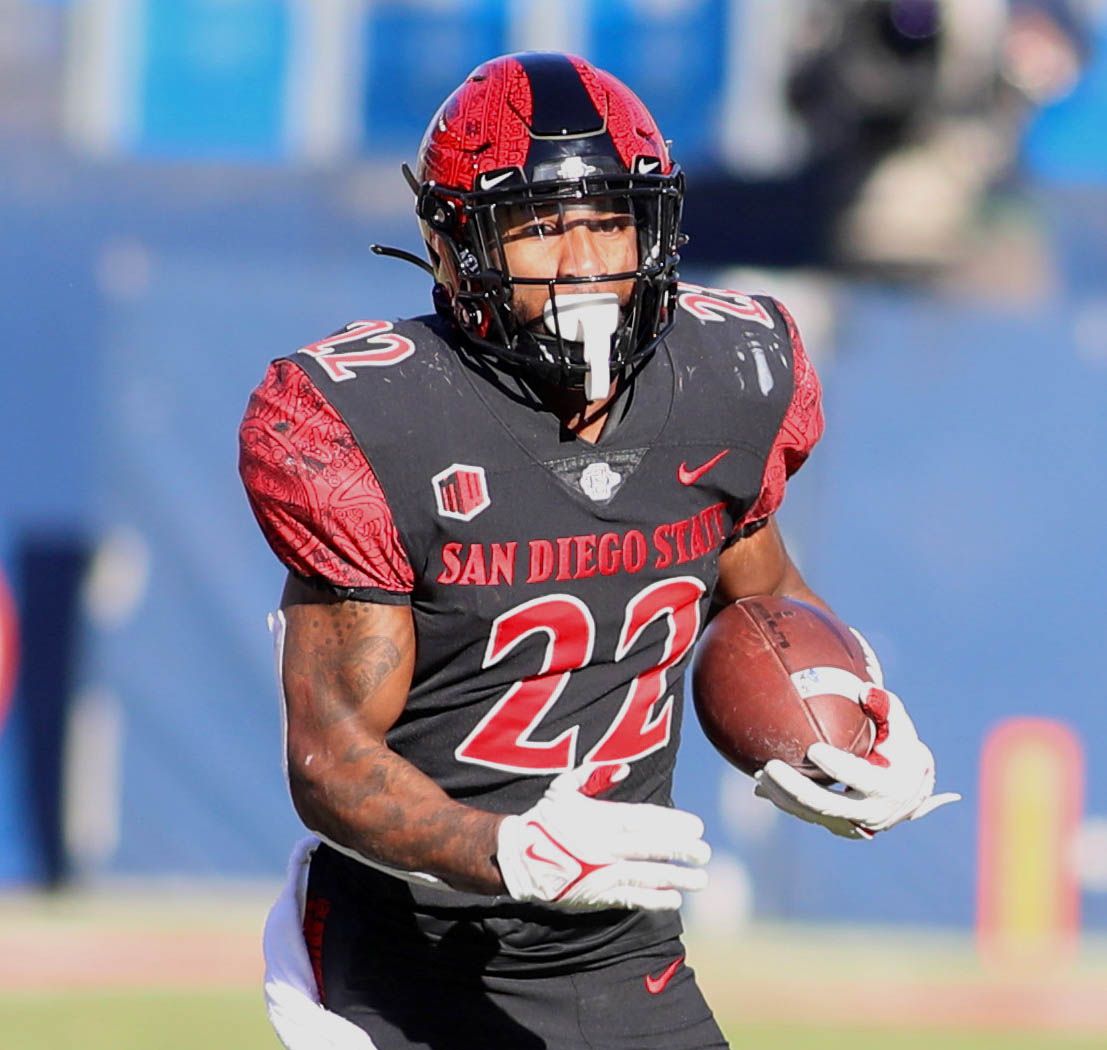 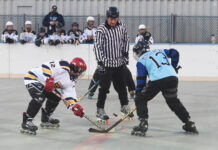 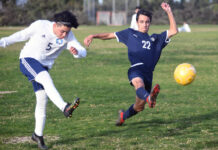 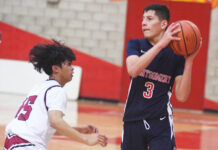