The Chula Vista Elite Athlete Training Center will be the focal point for top-notch international competition when the Women’s Rugby Super Series touches down June 28 to July 14.

The event will showcase the top five nations in the current standings in a round-robin format spanning five competition dates.

Kicking off for the first time in three years and expanding from four to five teams, the upcoming international tournament will showcase No. 1-ranked New Zealand, No. 2 England, No. 3 Canada, No. 4 France and No. 5 United States.

The tournament was last hosted by the United States in 2016 when Canada won the title and England finished runner-up for the second consecutive cycle.

Hosted in partnership with World Rugby, the Women’s Rugby Super Series 2019 serves as a meaningful step in generating more exposure for the larger women’s game and provides athletes with much-needed playing time, according to event organizers.

“As part of the women’s strategic plan, accelerating the global development of women in rugby, one of the key strands is to increase the competitiveness of international rugby across the women’s game,” World Rugby Commissioner Sir Bill Beaumont said.

The first four competition dates are scheduled in Chula Vista.

The United States and England will face off the opening day of competition on Friday, June 28, with a 1 p.m. clash, followed by Canada versus New Zealand at 4 p.m.

The series moves forward with two games on July 2: France versus Canada at 2:15 p.m. and New Zealand versus the United States at 5:15 p.m.

Competition on July 6 will feature another two games: France versus New Zealand at 2:15 p.m. and Canada versus England at 5:15 p.m.

The United States resumes play on July 10 with a game at 5:15 p.m. against Canada. England and France will play the early game at 2:15 p.m.

The final doubleheader is scheduled July 14 at the University of San Diego’s Torero Stadium, the site of last Sunday’s Major League Rugby championship game between the hometown San Diego Legion and Seattle Seawolves.

New Zealand will take on England at 1 p.m., followed by the France-USA match-up at 4 p.m.

Standings points will determine the place-finishes via the round-robin match-ups, with each team playing four games.

The upcoming women’s tournament should build on the massively successful MLR championship game event that attracted a capacity crowd of 6,000 to Torero Stadium to watch the Seawolves record their second consecutive championship with a dramatic come-from-behind 26-23 victory over the Legion by scoring on the final play of the game.

Tickets for the Women’s Rugby Super Series San Diego 2019 can be purchased at www.usarugby.org/super-series-2019 or usarugby/superseries.

Matches will be broadcast live on FloRugby.com.

There is much excitement in that corner as well after the American women recently qualified to compete in the 2020 Tokyo Summer Olympic Games and the men’s Eagles team finished in second place in the 2019 World Rugby Sevens Series standings.

Both the men’s and women’s teams are enjoying their most successful season in the history of the program.

By virtue of its history-making first-place finish at the last tournament series stop in Biarritz, France, June 15-16, the U.S. women’s team secured a berth at the 2020 Summer Olympic Games.

The top four teams in the 2019 regular season standings punch their tickets to the Tokyo Games.

First-year USA head coach Chris Brown said the U.S. program had never finished higher than fifth place or earned more than two medals within one season. He pointed out that as an example of the program’s tremendous growth, the American women were unable to qualify for the 2016 Rio Olympic Games through the regular season and were forced to clinch a berth through regional qualifiers.

“I’m massively thrilled for our program and players to have qualified for the Tokyo 2020 Olympic Games,” said Brown, who previously served as an assistant coach with the USA Eagles men’s program. “This achievement is a product of our growth as a team, our ability to learn and understand one another all season, as well as the advancement of rugby in America.

“It’s exciting to see how our player pool has grown in depth and how our athletes have risen as a collective to reach a No. 2 ranking and challenge the best in the world. I’m incredibly proud of the hard work and dedication by this group and our staff to make history this season and can only expect great things as we strive to reach the podium in 2020.”

The 2016 Rio Games marked the first appearance for Rugby Sevens in the Olympics. Rugby 15s was previously in the Olympic program in the early 1900s when the United States men won back-to-back gold medals in 1920 and 1924.

In what has become a monumentally historic season for the USA Eagles women’s program, the United States opened the 2019 Olympic qualifying season with a silver medal in the series’ first stop in Glendale, Colorado, finished fourth in Dubai and recorded three consecutive bronze medals in Sydney, Australia; Kitakyushu, Japan; and Langford, British Columbia, Canada.

The Americans were the only team to have made all semifinals to date, tying reigning World Cup champion New Zealand in total medal count and breaking their own record of podium finishes within one season.

The world series standings are based on points earned in 10 tournament stops around the world during the calendar year. The U.S. men’s team earned four second-place finishes and two third-place finishes to accumulate 177 points. Fiji topped the table with 186 points while New Zealand was third with 162 points.

For The East County Californian

The top-seeded Legion dropped a heartbreaking last-second 26-23 decision to the second-seeded Seawolves, but made a statement in other areas.

The game was played in front of a live national television audience on CBS-TV and a capacity crowd (6,000) at the University of San Diego’s Torero Stadium.

The Legion’s championship game appearance was a gift to the San Diego County rugby community that has supported the team in ever increasing numbers over its brief two years of existence.

The disappointing result notwithstanding, it was clearly a moment for the local rugby community to feel proud.

Both teams finished the season 13-4-1 following the hard-fought match.

“Things are definitely going well for me and for the team,” Lupian acknowledged.

The Legion, which battled back from a 14-6 halftime deficit, came within a heartbeat of earning its first MLR championship shield after taking a 23-19 lead on a three-point drop-kick goal by team captain Joe Pietersen with two minutes to play in Sunday’s game.

But a fortuitous kick downfield and an subsequent penalty left the Seawolves, who defeated the Glendale Raptors, 23-19, to win last year’s inaugural MLR championship at Torero Stadium, with another chance at advancing the ball with 30 seconds to play.

Seattle managed to score the game-winning try from 10 meters out on a driving maul as time expired.

The small core of Seawolves fans erupted in a roar while the mass of Legion fans looked on in stunned silence as the season came to an abrupt conclusion for the home team.

Still, it was a giant step forward for the sport in not only the San Diego region but in the United States as a whole.

Making strides
Lupian, displaying a stiff upper lip in the wake of Sunday’s championship game defeat, got his first taste of professional rugby last season by appearing in a handful of games. It was a matter of making the jump up a competition level from college and also earning the trust of teammates.

Playing time became more frequent this season. “I traveled to every single away game,” he said proudly.

The Legion, in fact, spent the entire month of May on the road, starting with a 23-19 loss in Toronto before making its way back to the West Coast with victories in New Orleans (26-19) and Utah (31-21).

The Legion returned to host Military Appreciation Day on June 2 in celebration of the 75th anniversary of D-Day and attracted the largest regular season crowd (4,175) in franchise history as the Legion topped the New Orleans Gold 22-10 to secure the No. 1 seed for the playoffs.

The Legion had steadily gained momentum as the season progressed, finishing with an 8-1-1 run to finish at the top of the nine-team standings table.

“We definitely came back more closer together as a group,” Lupian said in describing the team’s second-half surge. “We came to rely on our poise and composure to win games.”

The Legion, which lost 38-24 to Seattle in last year’s semifinals, had defeated the Seawolves twice this season.

“We fell short last year in the playoffs, so to get to the final this year is huge for us,” Lupian said.

As the sport continues to evolve in the United States, so does the former Highlander multi-sport standout as a rugby player.

“As a professional player, you need to eat healthy and maintain your fitness and strength,” Lupian said. “I also want to be the best teammate I can, on and off the field.” 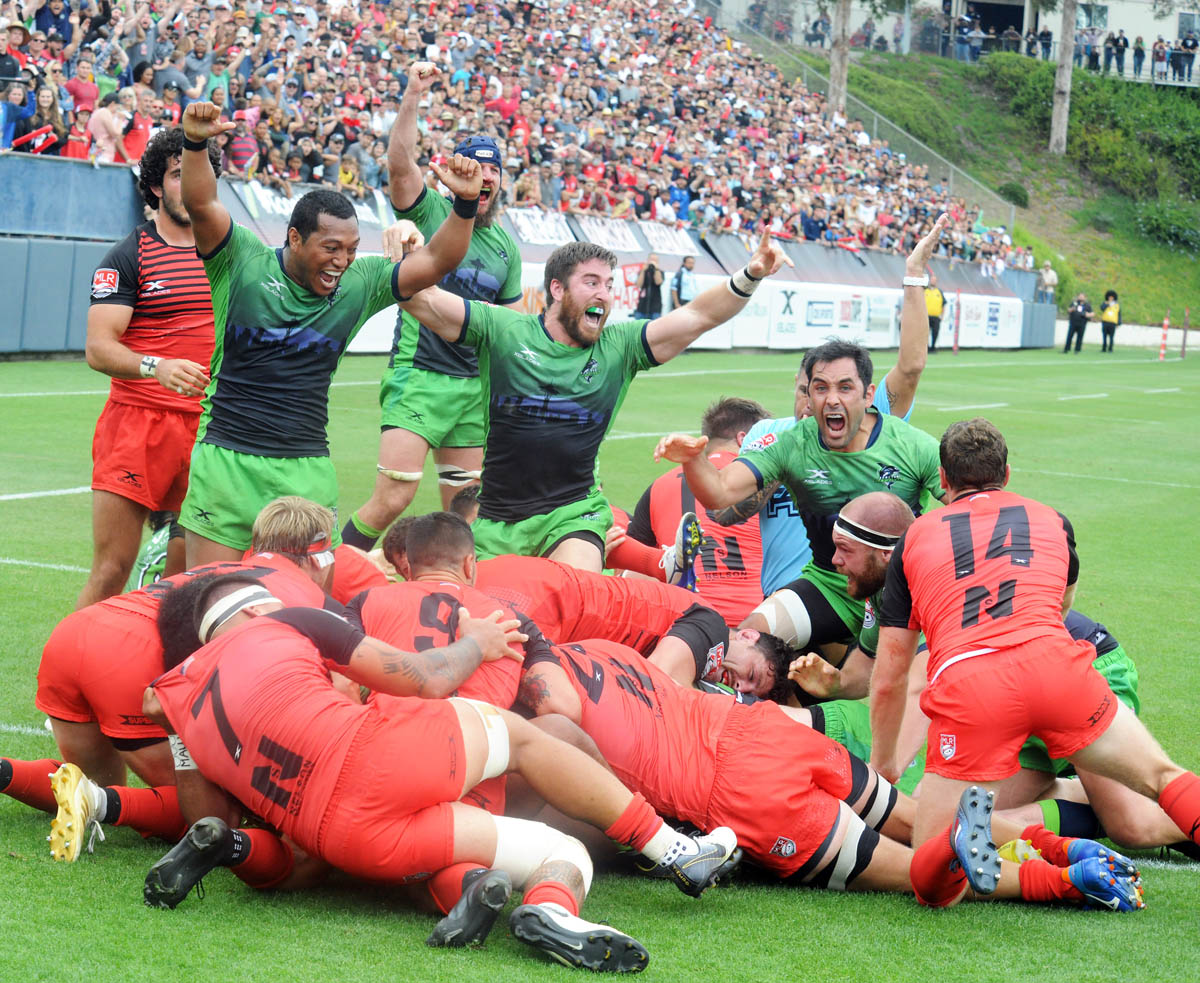 The Legion’s culture of togetherness and team chemistry played a huge role in the team’s postseason success, according to team members.

“Last year you wanted to go out and play hard,” explained loosehead prop Nathan Sylvia, an honorable mention All-American at Cal Poly San Luis Obispo. “This year you still want to go out and play hard but you also want to play for your teammates, play for the guy next to you. I think that’s what kept us going in that last series (in the semifinal win).”

Sunday’s dramatic ending was a complete reversal of fortune, however.

“The ball bounces both ways,” Legion scrum half Nick Boyer summed up concisely. “We’ll be back next year.”