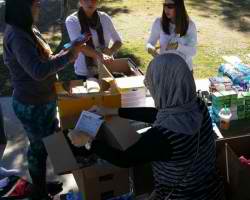 Michelle Padilla has only lived in Eastlake for six months and she is already impacting her community.

Just last month the Navy wife created Helping Hands, a community group dedicated to raising awareness about homelessness and offering a helping hand for those in need.

The group started after Padilla read Facebook comments on a news story about a local woman posing as a panhandler before driving off in a Mercedes.

“All of these people were saying all of these negative comments on how the homeless are just ‘lazy and they should get a job’,” she said.

Padilla, 40, took offense at those comments because she knows there’s a stereotype of homeless individuals that simply isn’t true.

Padilla knows some individuals are dealing with life-altering circumstances that cause some to live on the streets. Take her brother for example.

Padilla posted her brother’s story on Facebook as a reply to those negative comments and explained the struggle of homelessness. She described him as a normal person who owned a pool installation business in Florida. Then a few years ago while in his 40s, he unexpectedly developed schizophrenia, checked himself in and out of mental hospitals and, with nowhere to go, started living on the streets.

Several months after his diagnosis, Padilla found her brother and helped him receive the proper assistance through social services. He is now stable, she said.

“It hits home,” she said about the reasons she started the group. “I just would like people to raise awareness that it is hard for individuals who are homeless.”

The group initially started with her and a handful of her friends. Then she shared information about Helping Hands on various Facebook groups and saw participation increase to 119 members.

Recently the group put together more than 170 Blessing Bags, bags filled with toiletries, snacks, water and other necessary items. The bags also contain information about resources. The bags are made to be given out when a group member sees a homeless individual.

Padilla said she also started collecting clothes, blankets and winter gear that she plans to distribute. Encourages group members to take the bags and give them out when they see a homeless person on the streets.

She said changing the perception of homeless individuals is just as important as getting them the help they need.
“If I can change one person’s attitude to view (homelessness) differently, then (the group) is worth it,” she said.