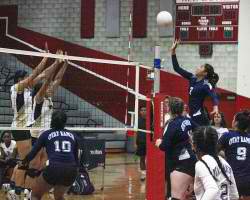 This year’s tournament even featured a team from Alaska.

“Every year this tournament has grown,” explained Sweetwater head coach Erick Hernandez, who served as tournament director. “The competition continues to get better and so many games are exciting to see. It was great seeing three Metro teams win championships.”

Olympian, which improved to 7-0 on the season, capped tournament play with a 6-0 record. The Lady Eagles defeated the Lady Mustangs, 2-1, in the best-of-three championship match.

Grecia Cordero led Otay Ranch (6-1 overall) with nine kills in the final while teammates Karen Cordero and Ryann Mojica each had five kills. Karen Cordero had seven aces and 14 digs to lead the Lady Mustangs while Shannon Casey contributed a team-high 10 assists.

Olympian swept Morse, Mar Vista and Central Union all by 2-0 scores in pool play. The Lady Eagles dispatched San Pasqual, 2-1, in the quarterfinals before meeting San Marcos in the semifinals.

Otay Ranch finished 5-1 in the tournament. The Lady Mustangs swept past pool-round opponents Orange Glen, San Ysidro and Classical Academy each by 2-0 scores and opened the playoff with a 2-0 win over Clairemont.

Hightower has recorded 57 kills in 17 sets to lead Olympian in hitting. She also has posted a team-leading 18 aces and 65 digs. Orbita leads the team with 106 digs in 15 sets.