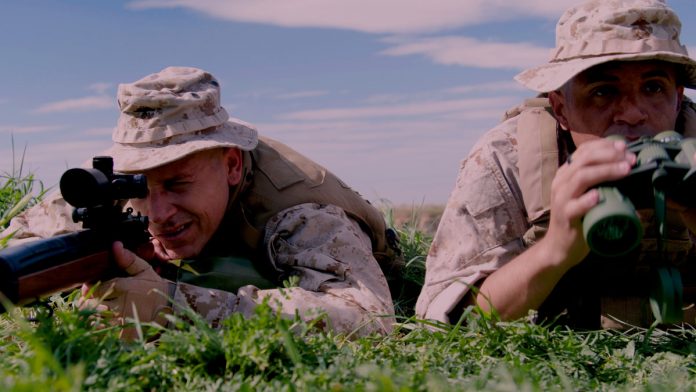 The GI Film Festival San Diego debuted its permanent home here in 2015, established in Washington D.C. in 2006. This festival features movies by, for, or about the military, that will be streaming the entire festival virtually this year May 18-23. In partnership with KPBS and Film Consortium San Diego, the festival has 38 films. The San Diego Local Film Showcase is a collection of films made here in San Diego County.

Local Chula Vista resident, Floyd Strayer, is debuting his first film as the director of “Life After Oblivion.” Strayer is a retired U.S. Marine with 21 years of active duty and for the past 22 years, worked for the U.S. Navy supporting sailors and Marines with engineering and tech services around the world.

“I am new to filmmaking,” he said. “This is my first film as a director. A few years ago, I went to Toastmasters to work on my interview skills and found a whole new world of public speaking, and in doing so, found my voice in talking about my brother who I lost to suicide in 1999. That led me into trying to perfect that speech because it is a hard subject to talk about, suicide prevention period.”

From there, Strayer said he hit comedy stages for about a year to learn timing and how to relate to audiences, and then the next year, auditioned for a play, got a role, and has done several plays in region since.

“I increased my audience hoping to reach more people with a message about the stigma around mental illness and suicide prevention,” he said. “I enjoyed acting, loved the industry, especially here in San Diego. It is a very supportive group here.”

Strayer went to the GIFF for the first time in 2019 to see “The Black String,” starring Frankie Muniz from “Malcolm in the Middle.” He said he saw a guy wearing a Veterans in Media & Entertainment shirt, so he went to introduce himself as he is a member of VME. It happened to be the director of the film.

“I watched the movie and the talkback, and I thought this would be another way to maybe one day being able to be here at the GIFF talking about my movie,” he said.

Strayer said a few months later, the Film Consortium San Diego did its Armed Forces Film Challenge, scenes about military, something about their tour or their lives. It was a 60 day challenge. The Consortium sent three scripts written by veterans from So Say We All. He had 24 hours to pick which story, then 60 days to write it, produce it, film it, and turn it in. In the challenge, everyone that participated in the filmmaking had to be volunteers.

Strayer said “Life After Oblivion” is about a sniper, based on a true story by Adam Stone from Oceanside.

“It is about one incident that took place as a sniper that he took home, and the ghosts that follow our veterans’ home,” he said. “It is about having that conversation to have people talk about stigma around mental illness. People are afraid to even say the word suicide, or that they have depression, take medication. Because of the topic, people wanted to work and support the film. It was a neat experience. It was not one person making this movie, it was because of a team of 30 people plus, and now an international team. We needed background music for the GIFF so I asked a composer in Brisbane, Australia, who was working with me from another project to look at it and what they would charge. She sent back beautiful background music and just said to put her in the credits and let her be a part of this project.”
Film Consortium San Diego Founder and President Jodi Cilley said she started the Consortium in effort to connect the San Diego community of filmmakers, producers, actors…underneath one umbrella, to bring up the production, quantity, and quality in San Diego. A film teacher since 2003, she said ultimately, she got “sick” of film school graduates having no local opportunities.

“No opportunities here to continue to grow their skillset, their professional resumes, really having to move to Los Angeles to work in the film industry. It has been growing and going strong since,” she said.

Cilley said the Consortium began with KPBS in 2014 with many projects but targeted the GIFF to create San Diego Local Film Showcase.

“The goal of that was to make sure we had a strong presence of local films, made for, by, or about the military as part of the GI Film Festival San Diego,” she said. “The partnership here is that we are a military town, we have many veterans here coming out of the military and moving into the film industry. There are times that my classes have been filled up with only veterans. There is a natural connection between military service and the rigorous stress and organization of a movie set. People out of the military are great to have on the set, being able to get along with everybody, knowing what hard work is like, working well on a team, show up on time, doing what needs to be done, and do it with a positive attitude. We have had a lot of great veterans on set through the Consortium since we started. It was a great match to take what we were doing fusing it to festival.”

Cilley said GIFF has a family friendly movie night, films about women in the military, PTSD, healing and health, the Black experience, films that talk about conflicts throughout history.

“This is not only for the military, by the military, or about the military,” she said. “It is a great educational tool to teach people these stories that you will never learn anywhere else about all of the aspects of the military. It is both historical and very present.”

“Life After Oblivion” is scheduled to screen in the virtual GIFF San Diego on May 21 at 6:15 p.m. in the Short Block/Local Dramas film block. “Life After Oblivion” is one of the six films in this year’s GI Film Festival San Diego Local Film Showcase, which honors filmmakers, talents and/or films shot in San Diego. For more information about the GI Film Festival San Diego, visit www.gifilmfestivalsd.org.