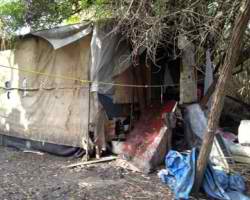 Previously she asked the item be placed on the council agenda for council discussion.

Aguilar said after the council approved the council districts map in the summer she was assigned to oversee District 2, the northwest part of Chula Vista.

Since she’s been assigned to that area she has been keeping up with the issues and concerns that northwest Chula Vista residents have, she said.

The main issue residents always email her about is the increasing homeless population in the northwest.

Aguilar said these concerns were reinforced when a news article in the Union Tribune listed northwest Chula Vista as a countywide hotspot for homelessness.

“I’ve been noticing, just in driving around and spending time (in District 2), that there just seemed to me to be an increasing number of homeless people around,” she said. “And at the same time I was getting more and more emails complaining about the homeless situation.”

Aguilar said half the emails she gets about the issue are from residents or business owners asking the city to get homeless individuals out of the city. The other half ask about providing a shelter and other resources that these individuals can use.

“I hear both sides of the picture,” she said. “Some people just want them to ‘get out of my neighborhood,’” she said. “Other people really feel compassionate and want the city to take some action, to do something.”

Aguilar said she is going into the Oct. 13 discussion without any preconceptions or ideas on how to solve the homeless problem.

Aguilar acknowledges that she doesn’t have the answer on how to address the issue, that’s why she is open to ideas.
“I just want to just have a discussion about what steps we as a city can take that might be helpful locally,” she said.

Southwest Chula Vista Civic Association President Tino Martinez is creating a documentary titled “Homeless at Home” and shared a snippet of the documentary with the council last Tuesday.

“The southwest does have a huge problem with the homeless,” he said. The (homeless) camps are growing. They spill out because what happens is the homeless community kind of police themselves, essentially if they get into trouble with one group, they have to separate and start another group.”

Martinez said he is creating the documentary to provide a voice for homeless individuals because he said there are homeless people who do want the city to provide more resources to them so they can get help. The documentary also shows how many homeless individuals are not drug addicts or alcoholics or have a mental illness; many of them are normal people who just had some bad luck in life.

She said while the west side of the city has an influx in homeless people, the east side also sees its share.

The homeless on the east side are not out in the streets but in canyons and open space areas, compared to the west side where homeless are seen hanging out in the public streets, Aguilar said.

“They are less visible in the east side,” Aguilar said.